Second World War veteran returned to RAF North Creake to cut the ribbon on the memorial dedicated to the 73 men who never returned.

Bernie How who served as a flight engineer on bombers at RAF North Creake with 199 Squadron from 1944-45 returned to the station on Saturday 5th June 2021 to unveil the new memorial. Nigel Morter and Claire Nugent, owners of the Control Tower Bed and Breakfast, have spearheaded the campaign to bring a memorial to the airfield after buying the Control Tower in 2011. While restoring the Control Tower back to its iconic modernist look, they soon became enchanted by the secret history of the aerodrome. Eager to learn more they started on a journey to uncover as much of the detail as they could about the airfield’s short 11-month operational life. With meeting veterans, they realised the need to celebrate those who served at this mostly forgotten station and commemorate those who were lost.

The Time to Remember project began in October 2017 when the couple gathered some local people together at The Control Tower to gauge the interest in creating a memorial; they were overwhelmed by the interest and response and the fundraising campaign began.

Nigel Reflects, “while the support from organisations such as North Norfolk Big Society Fund, Bomber Command Association and Egmere Solar Farm has been key, it has been the support of the local community that has been so moving; from a couple of quid in a can at a history talk through to substantial donations and incredibly generous offers of help including a fundraising beer, ‘Drink to Remember’ produced by Beeston Brewery - an extraordinary journey - we could not have done it without them”.

The culmination of this campaign is the memorial on the B1105 with its Stirling bomber centrepiece entitled ‘Home Safe’ and often referred to locally as the ‘ghost plane’. Created by Andy Knighton sculptures, it stands along with the Roll of Honour detailing the 73 men who died while serving at RAF North Creake. Claire says, “we are extremely pleased with the way the memorial has turned out, the sculpture is wonderful, and the Roll of Honour is most sobering, particularly with the airmen’s ages; being so young when they gave their tomorrow so we could have our today.” Andy Knighton, explains, “It was a huge honour to be asked to create the Stirling sculpture for the RAF North Creake Memorial. I feel it is very important that those who served and what they did is remembered for years to come.”

Paul Bishop, who offered his building services for free, said “I’ve done many jobs for Claire and Nigel while they’ve lived in the Control Tower, often finishing with a chat and a beer. I was very happy to help them out in this project and to remember the men who gave so much all that time ago.”

The Walsingham Estate, who designated the land for the memorial outlined that they were “delighted to support the RAF North Creake memorial. It is a fitting reminder of the bravery of the crews who flew from this airfield, some of whom never returned.”

Bernie How, the veteran of RAF North Creake concludes; “It is wonderful the idea having a Stirling memorial at RAF North Creake where they once flew. I am very proud to unveil it. I will visit the memorial, although over 40 miles away, at least once a year.” 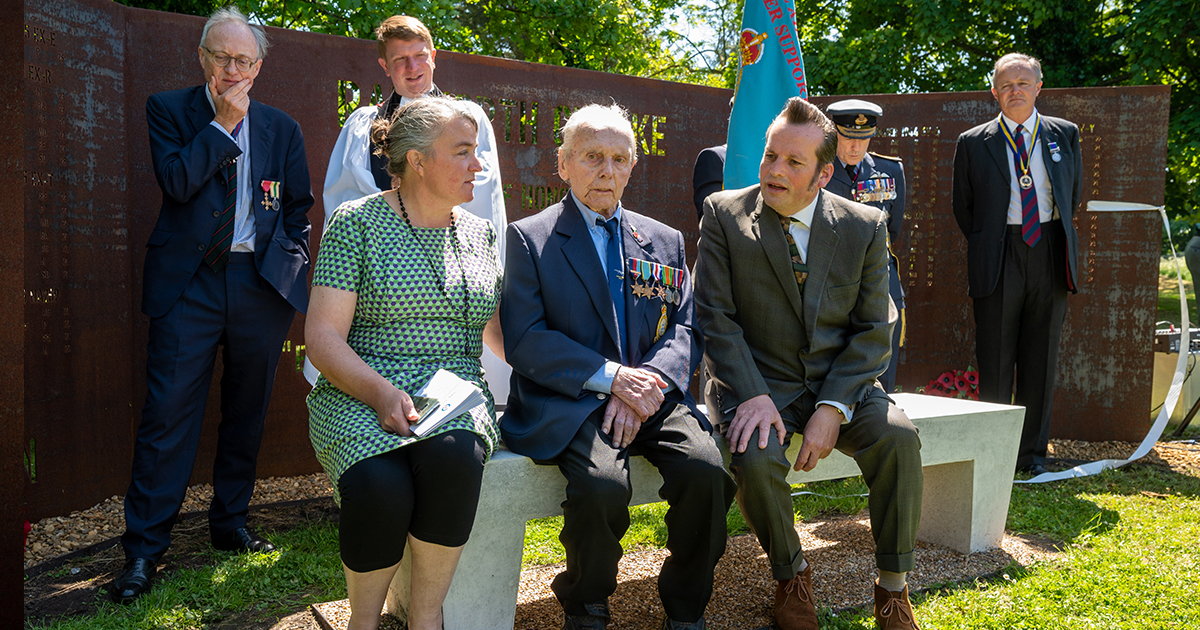 Unfortunately due to covid restrictions there was only a small invited audience of 30 people. A larger celebration is hoped for the future when restrictions are lifted.