The Wash area is roughly 20 km by 20 km wide and 5.00 metres deep, on average, and equates to roughly two billion cubic metres of water. It is a natural coastal enclave, and a haven for wildfowl and wetland species.

If a Wash barrier was built between Boston and Hunstanton, circa 20 km long, this has the potential to create the greatest inland freshwater reservoir in the UK - and this is not the first time it has been suggested, going way back to the 1970’s.

It would not only provide potable water supplies for the mass population, but also ample irrigation water for agriculture. Three main rivers drain into the Wash: the Great Ouse, the Nene and the Welland, so this freshwater inland sea would always remain fully supplied.

The Ijsselmeer, known as Lake IJssel in English, is a closed off inland bay in the central Netherlands, bordering the provinces of Flevoland, North Holland, and Friesland. It covers an area of 1,100 km, with an average depth of 5.5 metres. The river Ijssel flows into the IJsselmeer. The final stage was never achieved, due to budget cuts, but the first two stages were successfully completed.

The estimated cost of this project is £25BN – but that would probably ‘over-run’ – as always. I think this proposal has some merit, but others may disagree violently. At a time when natural resources are under pressure, we need to look at every opportunity – no matter how extreme.

The dual carriageway running along the top of the barrier would need to be speed restricted to say 50 mph by average speed cameras, and security stations to control the movement of so-called ‘cross county gangs’ and illegal immigrants. Toll booths would also be required to gradually recover the capital costs - £3.00 per car and £10.00 per lorry. 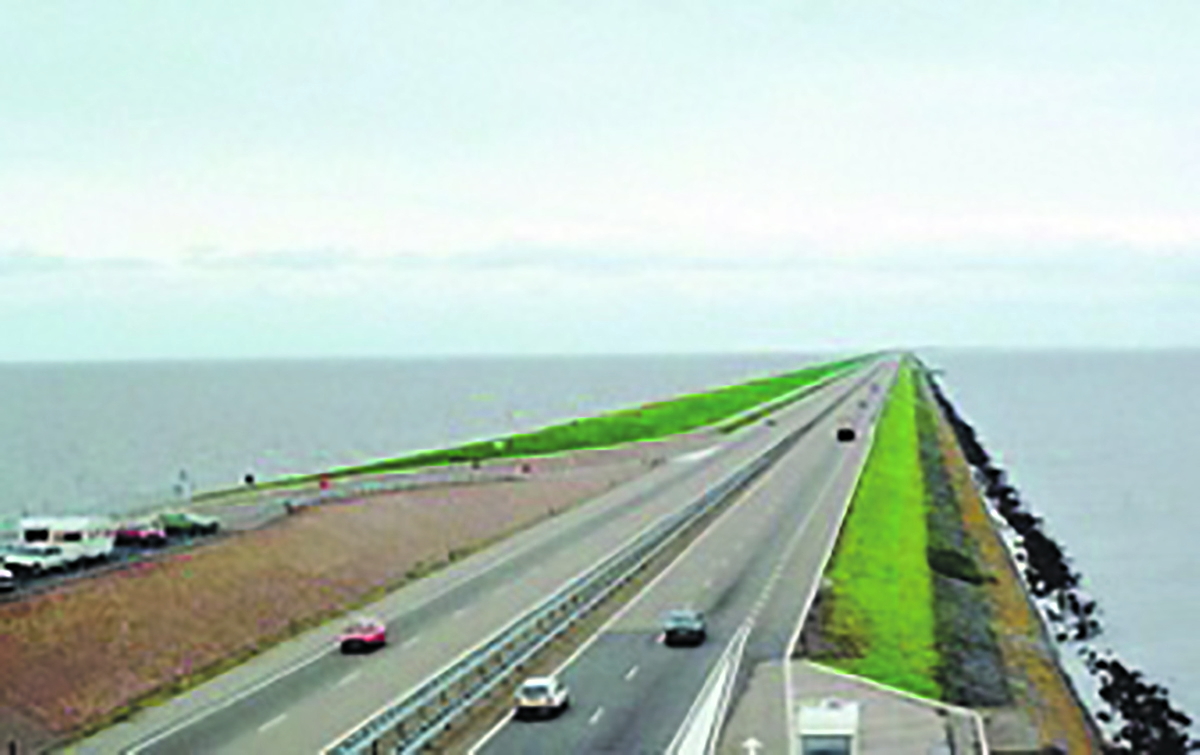 The vital port of Kings Lynn would need to remain accessible, which could be achieved by two-way lock gates and a fly-over bridge section for road traffic. Consideration for wildlife and the environment would also need to be a high priority and be factored into the project plans.

The recreational opportunities could include a stop-off restaurant and play area, plus both sea and freshwater fishing options for anglers.

If you need an argument against the preservationists you may like to raise the point that the current marshlands are not all natural either. The Dutch did a superb job of polderising and draining the Wash surrounds a few hundred years ago and if all the silt that is dredged and gradually dumped and planted outside the dike, you create a new marsh. Wetlands can be created as easily as they are destroyed.

Consultants with experience in such similar projects would be necessary – the Dutch basically.

Part of the feasibility study would take into account the relief of existing traffic on the A17, A16, and other major trunk routes.

A detailed assessment of the environmental impact would be required to determine the inflow and egress of water into the newly-created Wash area. This could include flood release and drainage opportunities in times of excess.

The economic benefits need to be clearly defined, measured, and accounted for from the outset.

Surge tide contingencies need to be considered in the construction in case we have a repeat of the floods of 1947 or 1953.

Would a private management company be engaged to run the newly-created barrier, and if so on what terms - payback guarantees, penalty clauses in case of failure to deliver, and so on?

Opportunities for solar panels and wind turbine locations may also be a consideration, together with monitoring of marine life habitats. The project has considerable potential for job creation (5,000?) plus contractors (200?). Development grants may also be made available.

We only have to look to our Dutch counterparts to see how the sea can be contained, controlled, and managed for the benefit of both mankind and the environment. We may not find King John’s jewels, but there may be a greater prize to be had in the process.

The Wash Barrier Proposal – a response from the RSPB - Sarah Mitchell, RSPB Conservation Officer, The Wash and North Norfolk Coast

The subject of a Wash barrier (or barrage) proposal comes up from time to time; last seriously rearing its head in 2008 when the idea was rejected by Government. At that time the RSPB joined forces with other conservation bodies to express our shared condemnation for the proposal. And we would do the same today.

Climate change and the associated sea level rise, flooding and the need for more sustainable fresh water is a huge concern for us all. We support the need for coastal resilience and flood protection, but in a way that works with nature, not against it.

The Wash is truly one of eastern England’s last great wildernesses. It’s the largest bay in England, the most important estuary for birds in the UK, and one of the most important wetlands for wildlife in Europe. The vast expanse of mudflat, sand dunes, saltmarsh, shingle and open water provide a rich mosaic of feeding, roosting and breeding habitats for birds. In fact, the rich wildlife of the Wash is of national and international importance and protected by law. It regularly holds up to 450,000 wildfowl and wading birds and, over the course of a year, more than two million birds use The Wash. It is also home to one of the North Sea’s largest breeding populations of common seal. It’s a breath-taking place, not just for the sheer volume of its wildlife, but for the astonishing variety of species.

People have lived and worked on The Wash for centuries; supporting a thriving fisheries and shellfish industry, bustling ports and nourishing the fertile soils of the surrounding farmland. The seclusion and beauty of The Wash bring pleasure to many and the benefits of the natural world for health and wellbeing are now well recognised. In the last few extraordinary weeks how many of us have lifted our spirits with views of The Wash?

It is well documented that tidal barriers carry huge risks to sensitive environments, but that’s not the only cost. There’s the huge monetary cost - money paid by the public - of carrying out the works and maintaining the barrier into the future. And what of The Wash fishing fleet who would find themselves out of business, not to mention the impact on the multi-million-pound wildlife watching and tourism industry that exists around The Wash.

The investment required is high-cost and high-risk in comparison to natural flood defence alternatives.

Mr Limb’s article calls for the need to “look at every opportunity – no matter how extreme”, but at what cost? The article does not appear to be based on fact, and we feel this is dangerous and irresponsible, illustrating a lack of understanding about our wild places and their value to society.

Destroying an area as precious as The Wash to build a barrier does not go hand in hand with Government calls for development to ‘leave the natural environment in a measurably better state than beforehand’. In the unlikely event such a proposal was to be taken seriously, the RSPB would vehemently oppose the project.

Sir, your recent article on a wash barrier misses the key aspects of the project.

First and foremost, is the flood protection from a North Sea storm surge. The Cambs, Lincs and Norfolk fens by value grow over half of the UK's food.

Second is the protection of the world significant Wash eco-system. By operating the barrier to maintain the current sea levels, we can ensure the Wash birds can survive.

Third, The barrier can provide energy storage, of a scale greater than all the batteries in the world put together. This storage is essential for us to be able to use the maximum amount of wind and solar energy.

Fourth, the barrier could provide a deep-water port to service the East Midland and possibly compete with Rotterdam.

Building a road along the barrier provides little value, Who in Hunstanton want to go to Skegness? ( And vice versa) By not putting a public road on the barrier one would save 30% of the cost you quote.

The value of the energy storage to the economy more than pays for the building of the barrier, indeed 20 years ago I had a "sovereign wealth fund" willing to finance the barrier. (But not the cost of getting the permission to build it.)

Sadly, I concluded that the politicians will only consider the barrier after the Fens have been inundated by the North Sea, with the likely loss of many lives.

Editor's note: If you would like to contribute to this debate, please e mail me at:

editor@townandaround.net by 12th February for inclusion in the March 2021 issue of T&A