The home of Springwatch, Autumnwatch and Winterwatch has joined a major project releasing over 100 Large Marsh Grasshoppers

This large insect has extremely striking looks, appearing in a vibrant mix of pink and yellow and fares best in wet fens and peat bogs, a habitat that has been lost to much of the UK over the past hundred years, resulting in their near extinction. Restricted almost exclusively to the valley mires and wet heaths of the New Forest and Dorset, this iconic species’ former distribution included wetland habitats across Norfolk and the Cambridgeshire fens. The ‘hoppers’ - as they are known - were released under tight security on 22nd August 2021. 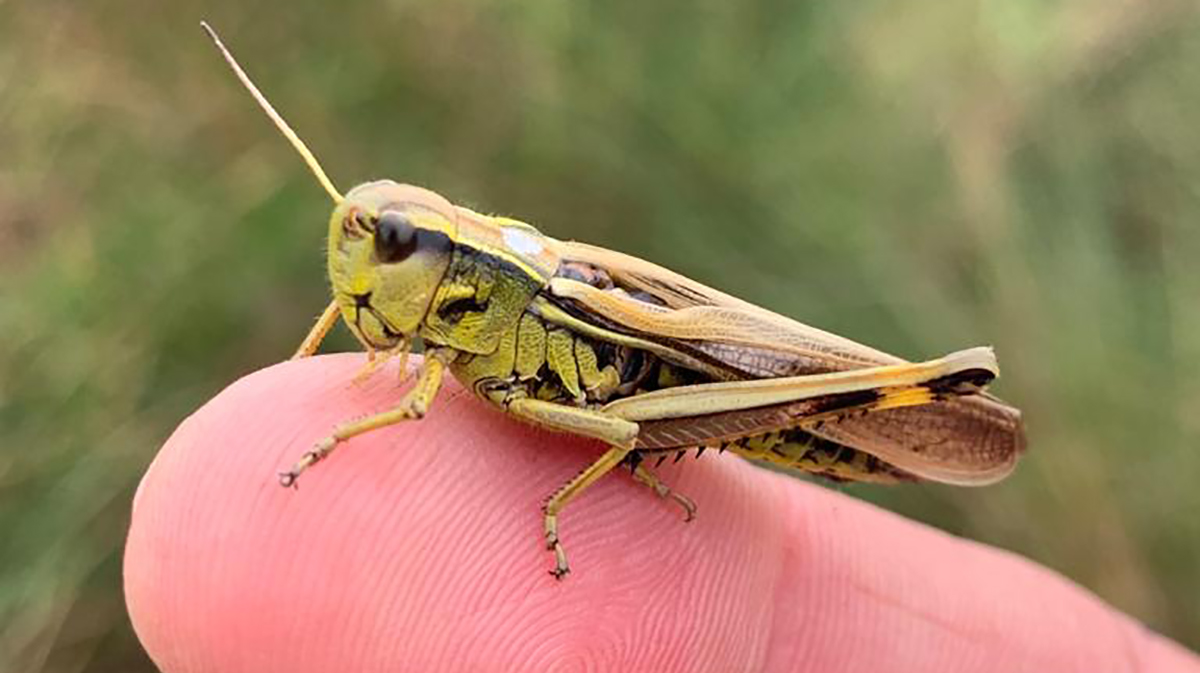 A total of 122 of these hoppers were released at Wild Ken Hill, out of a total of 1,058 released during 2021 as part of the project. It is hoped that the widespread habitat creation and enhancements that have taken place at Wild Ken Hill over the past few years provide a healthy, nurturing environment for the recently released grasshoppers.

Lloyd Park, Conservation Leader & Ecologist at Wild Ken Hill said “Without human intervention, these creatures would likely become extinct in the UK. We need to restore creatures great and small to our natural landscape, so we are thrilled to be part of this important step (or should that be 'hop') in the recovery and conservation of Large Marsh Grasshoppers. The way we manage wetter areas here at Ken Hill should provide them with everything they need to become an established important part of the site’s ecology”

On this project, the grasshoppers were kept by “Citizen Keepers”, volunteers across England. The keepers were required to feed the grasshopper nymphs every day with fresh grass.

Stuart Green, Lead Entomologist at Citizen Zoo explained: “Four volunteer Citizen Keepers released a total of 122 young adult Large Marsh Grasshoppers at 2 sites in marshy habitat at Wild Ken Hill. Each grasshopper was marked with a small spot of coloured oil paint, according to its release site, so their movement could be monitored. They seemed to be doing well when the site was checked 8 days after release. Hopefully, by now they will have laid eggs, which will over-winter and hatch into a new generation of Large Marsh Grasshoppers next Spring.”

In the summer of 2022 it is hoped that the distinctive clicking noise made by the males will suggest that the introduced species will have completed its annual life cycle in the wild, overwintering as eggs, hatching in early summer and passing through four nymphal instars, before becoming adults.

These invertebrates will break down and recycle organic matter with their micro-grazing and provide food for other animals as a prey species, helping to boost biodiversity and add back to the flourishing ecosystems at Wild Ken Hill.

Citizen Zoo safely collected a limited number of wild grasshoppers at several sites in the New Forest in 2018, where half were introduced directly at a wetland site in Norfolk. The rest were brought into captivity and allowed to breed in carefully controlled conditions, where they laid more eggs than they would have done in the wild. These eggs were collected for hatching and home-rearing the following summer.

Dominic Buscall, Project Manager at Wild Ken Hill said: “We’d like to take the opportunity to thank the Citizen Zoo team for their great work on this project, as well as all those involved from the other project teams – keep it up!”