Perhaps unsurprisingly, road transport is now the greatest contributor to environmental damage: 25% of greenhouse gases and 80% of air quality breaches are caused by road transport (John Armitt, National Infrastructure Commision, 2018). Climate change has never been so ingrained into the public’s collective consciousness as it is today: every day brings startling facts, news and predictions that herald the very destruction of the planet. And, as Health Secretary Matt Hancock states: “Our health is shaped by the environment we live in and dirty air is the largest environmental risk to public health in the UK.” Environmentalists are lobbying for change and initiatives in an attempt to slow or halt this path to undeniable doom, but just how much change can one person bring about? And really, how much air pollution can this rural corner of the country really be contributing to the problem?

Arguably the most startling information brought to light from the initial findings of the King’s Lynn Transportation Study, commissioned jointly by the County and Borough Councils in September 2018, was the acknowledgement that the Borough has the third greatest increase in emissions in the UK 2005 to 2013 (Government Dept for Business, Energy and Industrial Strategy) and within Norfolk the Borough has the highest per capita CO2 emissions in Norfolk—29% higher than Norfolk average and 34% higher than the national average. (The Borough’s Local Plan Review, Sustainability, Appraisal Scoping Report Review 2017). So why, despite the notion that West Norfolk is a predominantly rural area, is the air quality issue so prominent?

The data on the levels of air pollution in King’s Lynn is accessible to the public and is extracted from the monitoring systems at the Gaywood Clock area and at the town centre one way system and London Road. Gaywood consistently has over double the levels of NO2 than London Road however, and this is noted in the initial findings in the report. The report notes that: “Studies have identified that King’s Lynn is generating unsatisfactory levels of air quality” and, worryingly, that “ambient concentration of NO2 in town centre should decrease by approx. 12% to meet annual mean concentration levels. In Gaywood the equivalent is 26%.”

The report particularly highlights the pertinent issue of the congestion that stretches from the Queen Elizabeth roundabout and into the town centre through Gaywood, noting, the hospital has a wide catchment for employment and health needs and contributes to heavy peak period traffic levels in this particular area. Unfortunately, due to the nature of its location as a route into the town centre and as the hub of health and education facilities, the roads surrounding are oftentimes extremely congested, contributing to the high levels of NO2. It is also financially draining, too, as congestion costs the average car driver £1.2k per year (Stagecoach Group, independent research 2018).

Worryingly, those that are based within the vicinity of Gaywood are typically the most vulnerable to its effects, and a recent study found that: “Children are biologically more susceptible to pollution because their bodies are still not mature... Exposures to air pollutants during the prenatal period and during childhood can have harmful and irreversible effects on the lung and other organ systems” (Forum of International Respiratory Societies’ Environmental Committee, ‘Air Pollution and Noncommunicable Diseases,’ 2019).

These findings should raise concern for the health of the children attending any of the three High Schools or the College, and a recent study reiterates this notion as it found a third of parents said dirty air would be a factor in deciding which school their child attends (Hubbub, 2019). The effects on prenatal children should also not be dismissed, considering that the hospital lies within the vicinity. 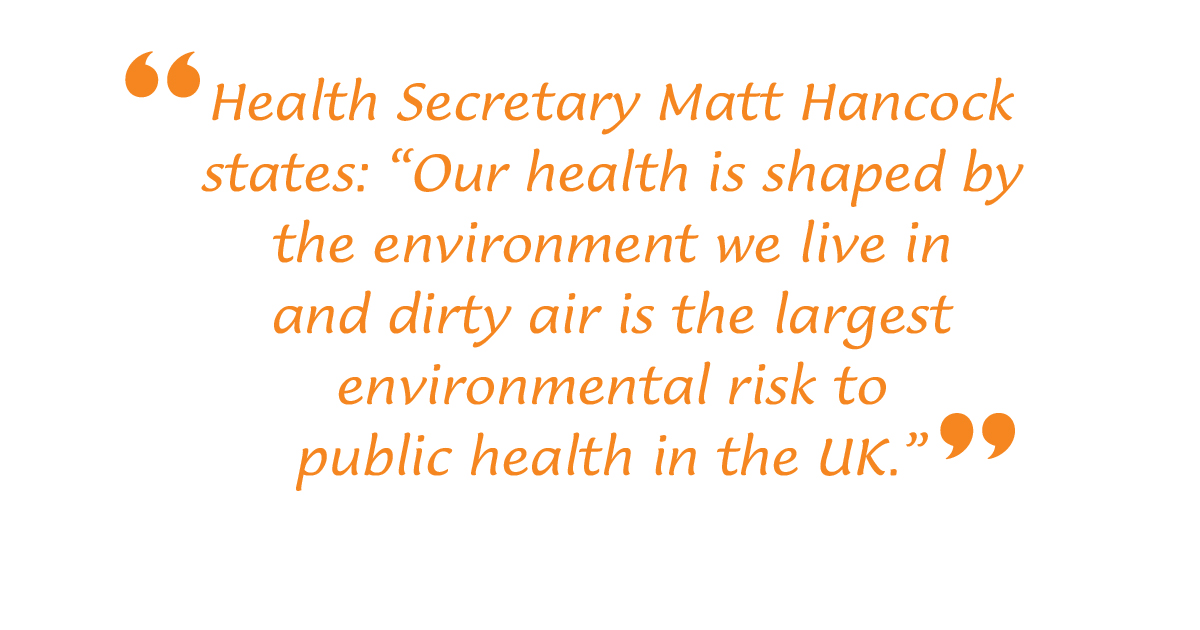 Naturally, a hospital attracts those that are already in compromised health, and the effects of air pollution on many illnesses and disorders cannot be underestimated. According to Public Health England (PHE), diseases strongly correlated with air pollution include child asthma, coronary heart disease, stroke and lung cancer, and in May 2018 predicted that if pollution levels were maintained at the same level that there would be 2.4m new cases of disease by 2035. Evidence has also suggested that the threat is not only about physical health, but mental too, as “the central nervous system is particularly vulnerable to air pollution, suggesting a role in the etiology of mental disorders, like anxiety or depression" (Brunst, Environmental Research, 2019)

The study mentioned earlier about how pollution affects children goes on to state how pollutants permeate throughout the body: “Air pollution can harm acutely, usually manifested by respiratory or cardiac symptoms, as well as chronically, potentially affecting every organ in the body. It can cause, complicate, or exacerbate many adverse health conditions... it is likely to cause greater illness in those with heavy exposure and greater susceptibility... Harmful effects occur on a continuum of dosage and even at levels below air quality standards previously considered to be safe” (International Respiratory Societies’ Environmental Committee, ‘Air Pollution, 2019) We cannot escape air pollution and thus this drip-feeding of toxins builds up in the body and perhaps even exceeds guidelines of ‘safe’ amounts of pollution. Typically, we go to a hospital to receive treatment and recover, but what is to be done if the very air surrounding this is worsening your ailments and slowly killing you?

These devastating effects on health have not gone unnoticed by Matt Hancock, who has commissioned a review of the impact of dirty air on health. In January the government published its clean air strategy, which vowed to reduce the public’s exposure to toxic air and to halve the amount of people living in areas breaching World Health Organization guidelines on particulate matter by 2025. Emphasising how this threat can further compromise an already underfunded and oversubscribed NHS: “We cannot underestimate the very real impact that dirty air – this slow and deadly poison – is having on our lives, our health and our NHS.” Not only is pollution a cataclysmic burden on the environment, it is also having a knock-on effect on the already struggling institution.

The current infrastructure of the town is inherently incapable of sustaining such a mammoth growth in the population, and therefore the extra housing and the traffic that comes with it. The pressure on the hospitals, employers and schools to provide their services in such a dense area of the town is not only wasting the time and money of residents as they sit in congested traffic, it is proving hazardous to the health of both the population and the planet as a whole. 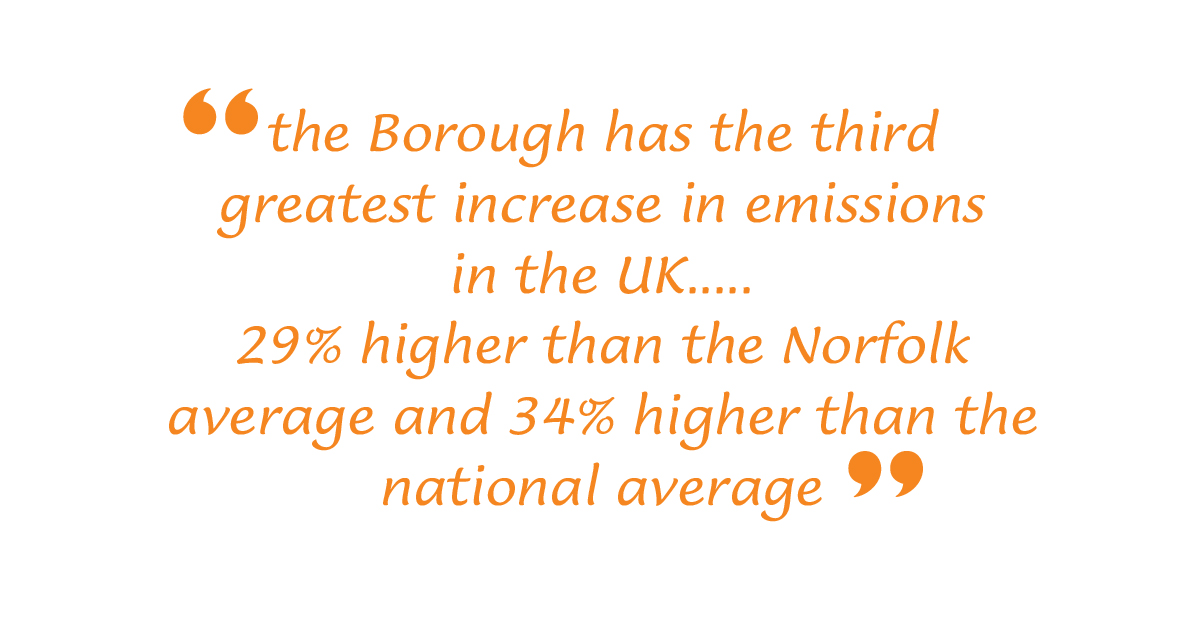 Immediate reforms and initiatives are imperative in tackling the issue. An answer could lie in re-evaluating the availability of public transport and to make buses more appealing than driving: this would help boost the local economy, tackle the issue of social isolation, improve traffic flow and reduce air pollution. It would be premature to think that King’s Lynn could consider following suit of London who recently introduced revolutionary hydrogen-powered double-decker buses that run on green hydrogen and emit water as exhaust, but parts of the town have one of the most modern buses in the country which are less polluting than even modern diesel cars. Therefore encouragement to switch from car to bus for even just one trip to town each week would be a good start. Cycling and walking initiatives should also be promoted; not only are these modes of transport hugely beneficial to people’s health and wellbeing, their carbon footprint is zero.

The overarching issue going forward lies with the Borough Council’s Local Plan, currently up for its five yearly review. This document sets out policies which land developers must follow to secure Planning Permission, as well as possible sites suitable for development. The current (draft) Review document is woeful in its intentions – for the next fifteen years – on bringing together land use and transportation policies, more than once stating that these are matters to be dealt with in the long term. Thus new developments are being built, and will be built for at least a decade to come, which lock in car dependency for future generations. It is, it can be argued, nothing short of outrageous given the town’s existing poor standards of air quality.

Principally, however, it is down to each individual to reduce his or her environmental burden in order to make a collective difference. Shorter journeys are largely and a lot of times unnecessarily polluting; cycling, walking and using public transport can all make a difference. Incentivising these modes of transport and pushing the prices of parking in town and operating a vehicle on congested roads may be the necessary evil to combat this. However, the issue of punishing those on low incomes would naturally arise from such an undertaking, so it is imperative for lower polluting forms of transport to be made as appealing and as financially viable as possible.

Thankfully, the government are acknowledging and taking some strides to try and halt the perilous path that our modern lives have led us on, but it will take perseverance, dedication and technological innovation to make any real difference. Until we live in an innately greener world, the time is now to do whatever possible to keep the air that the planet and we breathe, clean.