She automatically qualifies for the US Women’s Open.

Jessica Baker, 19, is the winner of the 119th Women’s Amateur Golf Championships. Held at the wonderful links Hunstanton Golf Club on Saturday, 25th June, she managed to overcome a valiant attempt from Swedish rival, Louise Rydqvist, to win 4&3. The youngster, who hails from Gosford Park Golf Club in Tyneside, was delighted saying: “I am absolutely stunned; I’m really happy”.

Superbly managed by the Royal and Ancient, Hunstanton Golf Club hosted the Women's Amateur Golf Championships from the 20th to 25th June. A strong international field of of 144 players travelled from as far afield as Japan, India and Australia to attend this prestigious event. There is no doubt, going by the talent on display, that the women’s game is going from strength to strength.

To these young players, this was a huge stage, a stepping stone to the professional circuit, requiring little margin for error. The winner automatically qualifying for the US Women’s Open. Immense pressure on young shoulders.

The term ‘amateur’ does these up and coming players an injustice as the talent on display was phenomenal, incredulous in fact, with drives in excess of 300 yards not the rarity, the norm. Whilst each individual plainly possesses a talent to take them to the next level, like any sport, drive, mental strength and nous are just as important. The difference between amateur and professional can be a fine line but this crop of young players proved that the women’s professional circuit will be looking over their shoulders.

The early rounds involved players posting their best score over 36 holes - Stroke Play. The best 64 players proceeding to the next round, avoiding the dreaded cut. The second stage involved a knock out format, which meant competing directly against an opponent, Match Play. Two differing formats that suit some players and not others. And so it proved. After the first Stroke Play round, Japanese player, Ami Yamashita, led the field, having equalled the course record by a female with an eight under par. Meeting the lowest scoring stroke player qualifier in Match Play, she was surprisingly beaten in the last 64. A bad day at the office is unforgiving on the Match Play golf course.

The well supported English player, Amelia Williamson, from Sheringham flew the local flag and performed admirably, reaching the quarter finals before succumbing to Italian Emilie Paltrinieri (2&1) in one of the most exciting games of the tournament. 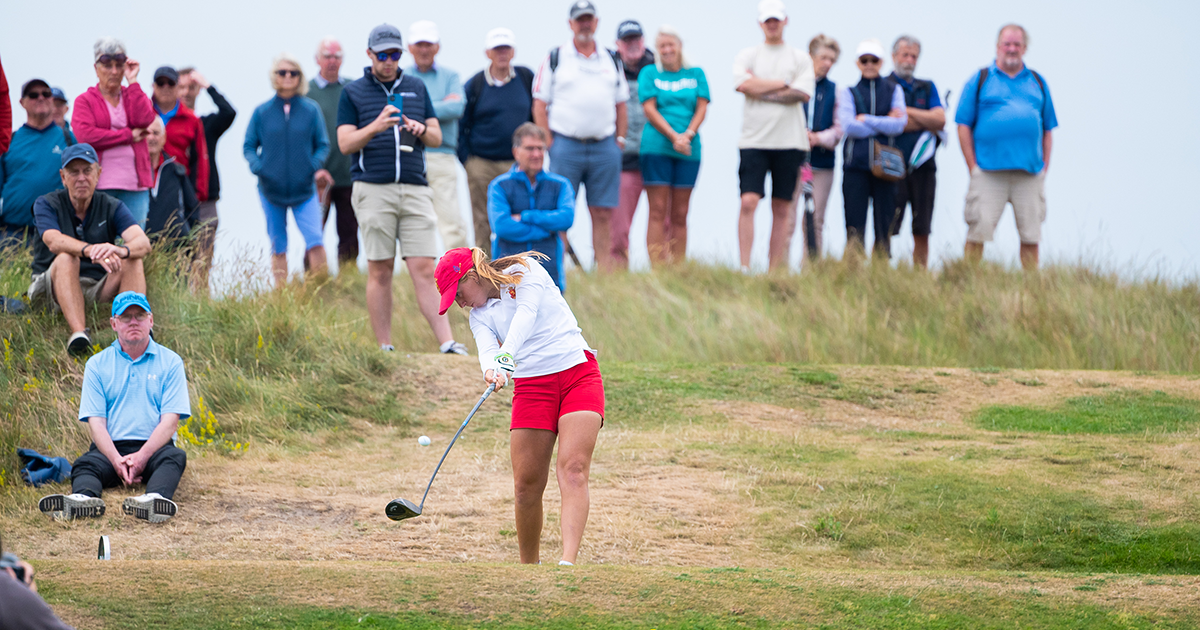 The boisterous Spanish contingent were well led by the excellent Carla Bernat, who was fast becoming the tournament favourite with her consistency. 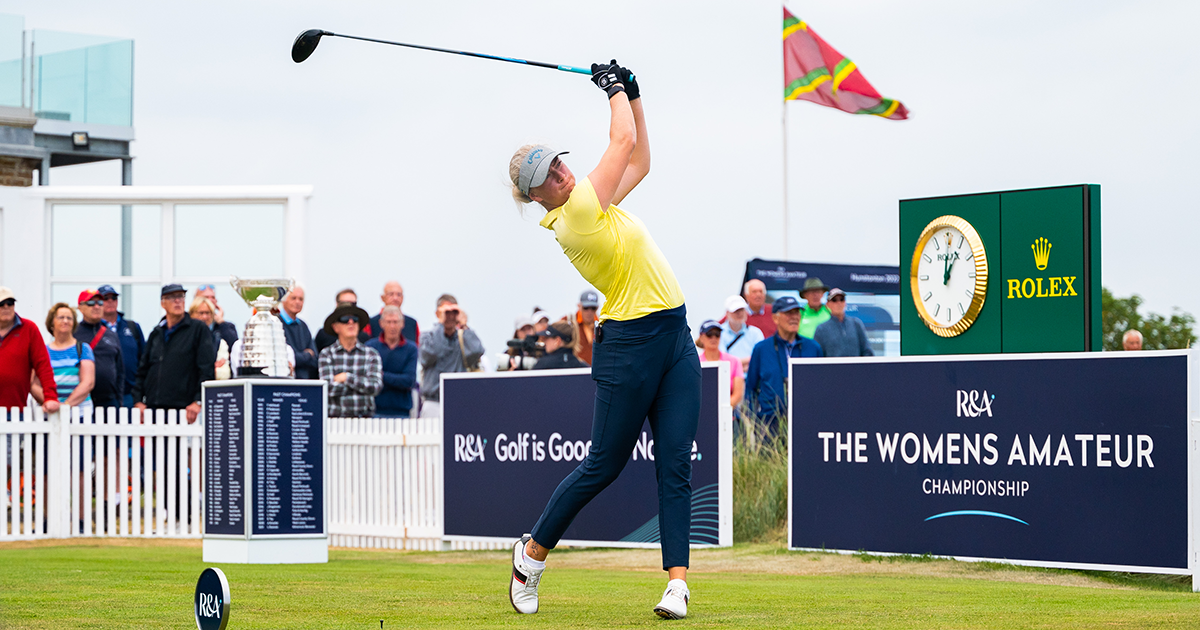 As the tournament evolved so did the intensity. Popular Australian player, Kelsey Bennett, just came up short in her quarter final match against Rydqvist. Having not been behind in the whole match, she lost in a tense second hole play-off. Modest in defeat, Bennett said, “it was an amazing experience, a great course. It was tough, as the conditions were different each day but I thoroughly enjoyed it”.

In the other quarter finals Hannah Darling and Baker put an end to the talented threat of Italian duo Fanali and Paltrinieri respectively. Bishop Stortford girl, Rebecca Earl, put up a brave fight against the ever improving Spaniard, Bernat, before succumbing 2&1. Earl is one to watch in the future. 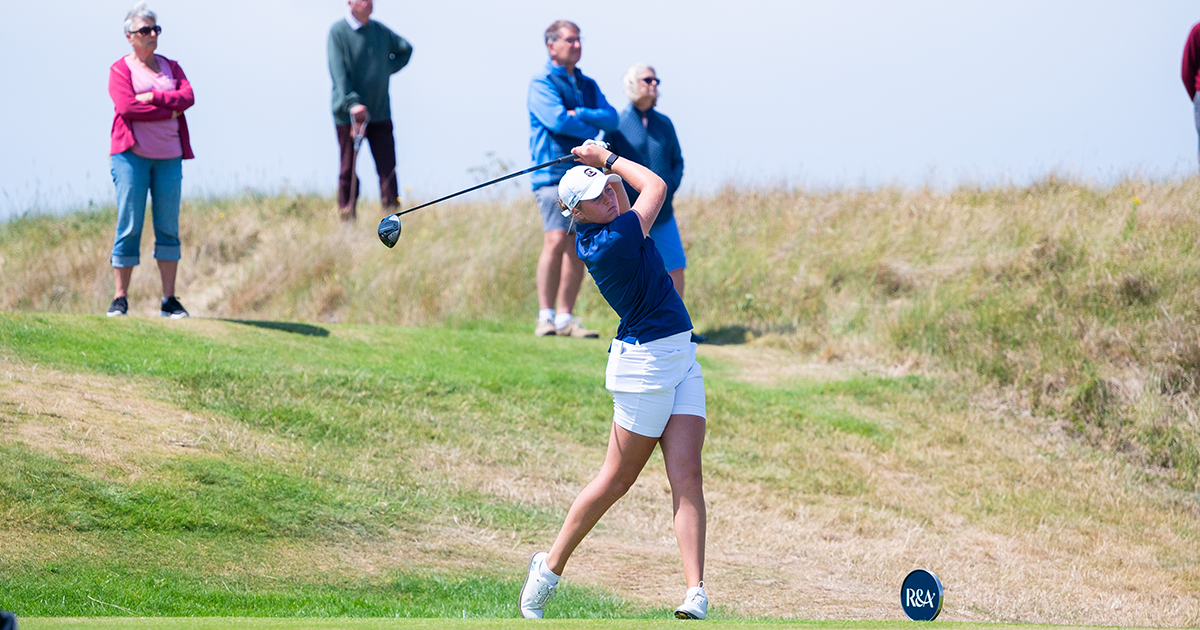 This meant an all British semi-final, but Baker managed to overcome a spirited fight back from Scottish favourite Darling to amazingly and deservedly, seal that final berth. 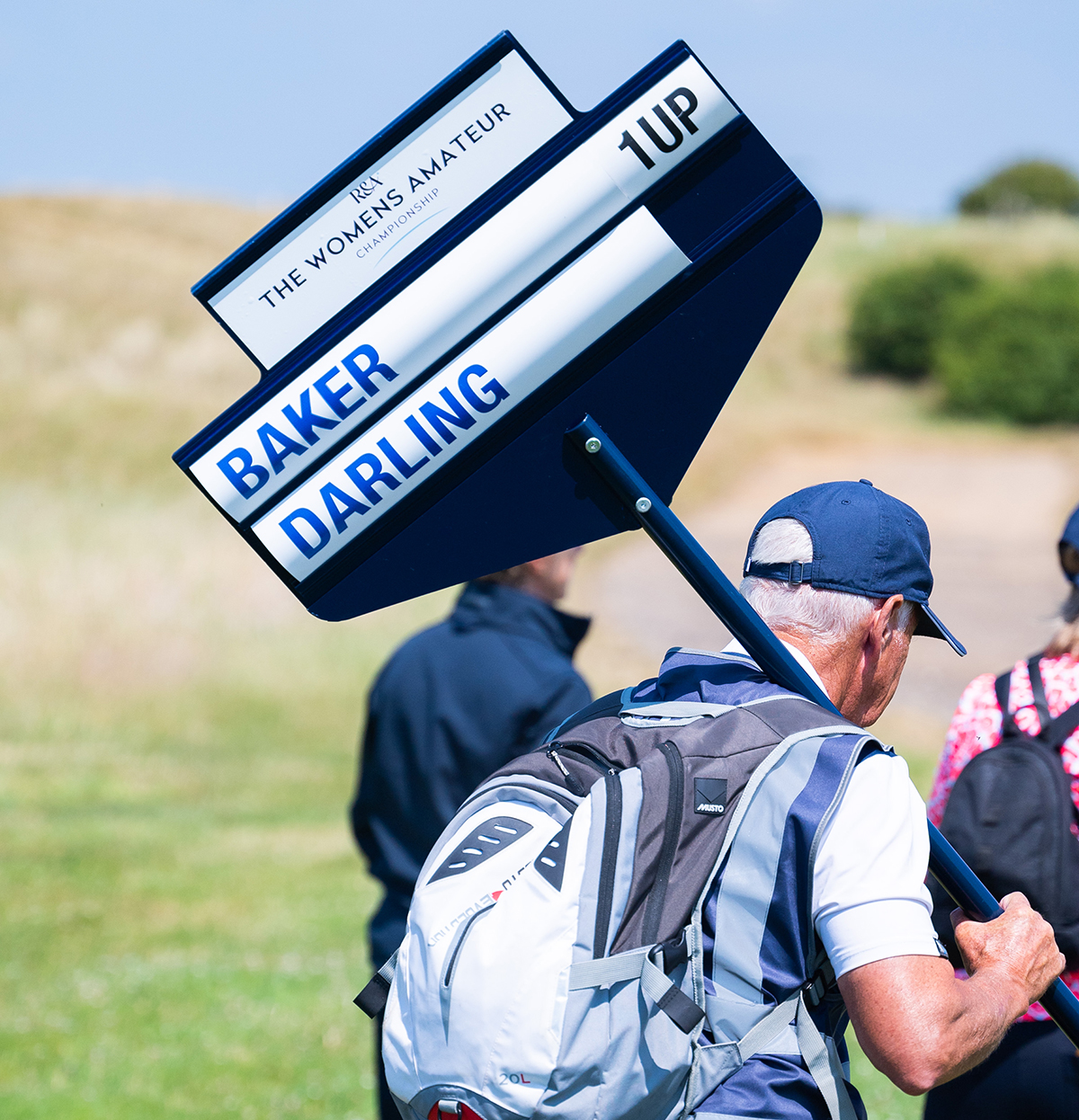 In the other semi-final, the in form Spanish favourite, Bernat, really took the game to the Swede, Rydqvist. Despite being seemingly in control with three holes to play, it was, yet again, the effervescent Rydqvist, who showed nerves of steel to win the last three holes and, with it, the match. Nous, steel and mental strength. 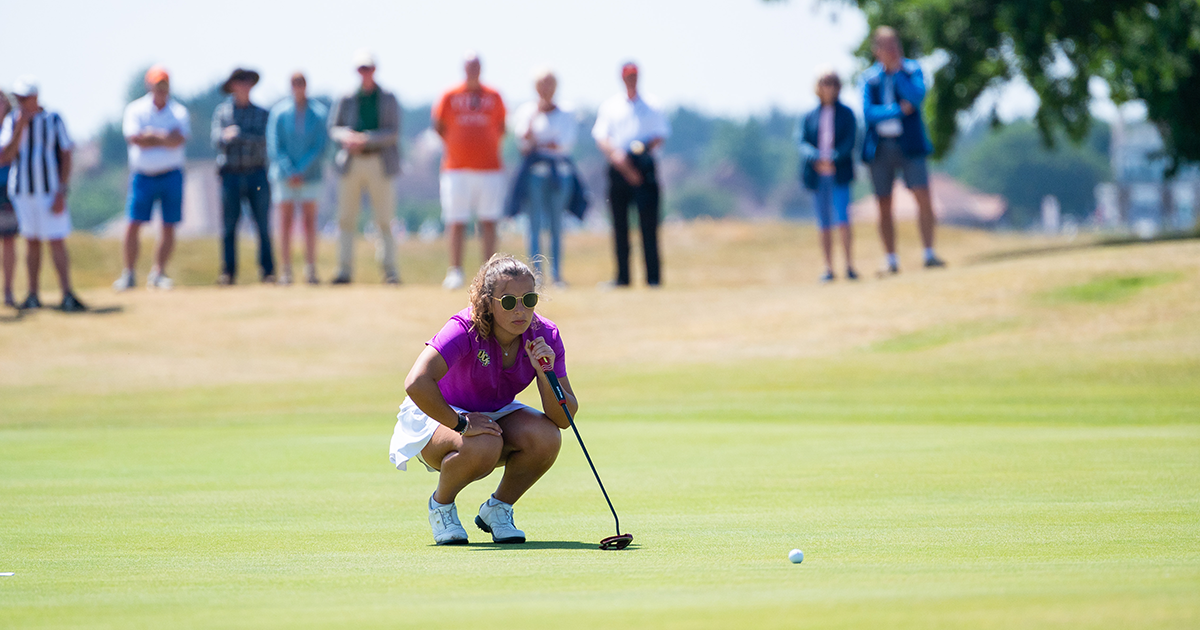 Whilst Rydqvist had certainly taken the hard route to the final, Baker, too, had had her moments, having to sink a 25 yard putt on day two just to make the cut. Small margins. There was no doubting, or coincidence, that these two young players had grown in confidence as the tournament progressed - a handy trait to possess in tournament golf.

The eagerly anticipated final was a topsy turvy affair to begin with as both players alternated the lead, Rydqvist actually led after the 13th hole before Baker stole a march, taking a three shot lead after 18 holes across the 36 hole final. Despite a late rally, there was no way back for Rydqvist this time as Baker kept her nerve going on to secure a convincing win at 4&3. Rydqvist’s tension stricken route to the final may have taken its toll but there was no disputing Baker’s deserved victory. A very worthy and popular winner. Watch out for this girl in the future.

Throughout the week, spectators were privileged to see, what is plainly, the next crop of world talent coming through. The standard of play was exceptional. The friendly team at Hunstanton Golf Club should feel proud, making sure the players, their teams and visitors alike enjoyed the experience and felt welcomed. In particular, the ground staff, meticulously working at 4am each day to ensure the high standards of this perfectly manicured course were maintained throughout the tournament.

Hunstanton Golf Club professional, James Dodds, said “It has been a great honour to host the Women’s Amateur Championships, the standard of golf has been amazing”.

What is for sure, the future of Ladies golf is in safe hands for the foreseeable future if the performance of these youngsters is anything to go by. For the moment, though, let’s let Jessica Baker enjoy her well-deserved moment. 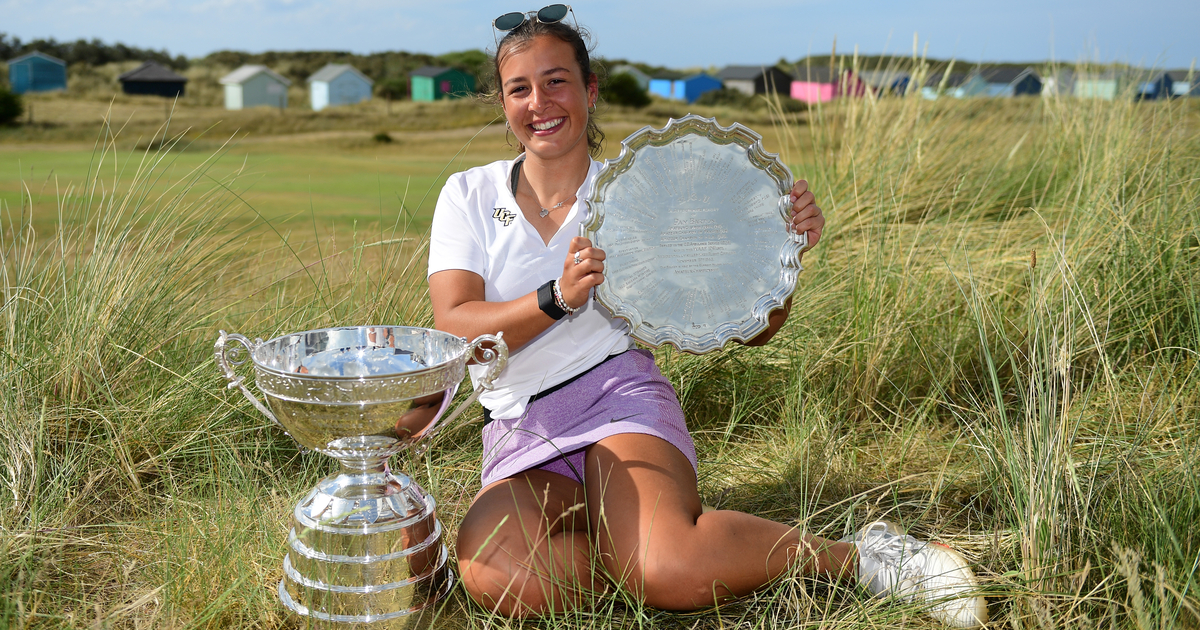