Raw sewage runs down the streets of north coast villages

Reports of the north coast sewers being overwhelmed with raw sewage and effluent streaming from pumping stations and manholes are being reported on social media.

Local MP’s, County and District Councillors have asked Anglian Water for action. However, they appear to be less than rushed, to alleviate the problems with complaints from many locals being dealt with very slowly.

Apparently Anglian water are blaming the record rainfall for the frightful situation, and that they don’t have the resources to deal with it as they reportedly have over 400 incidents around the area.

T&A is advised that Independent County and Borough councillor Sandra Squire has written to the Leader at County Hall demanding a stop to the mish mash of organisations employed to look after flooding and general water management. Meanwhile, it is also reported that former military chief Lord Dannatt has been brought in to oversee a committee that will encompass all, or at least many of the organisations who are clearly struggling to manage water issues at this time.

The huge response on social media indicates the dissatisfaction in the arrangements as they stand, with many observing that until the 60’s waste was pumped directly into the North Sea. A water treatment plant was built during the 60’s on the eastern side of Burnham Market which may have reached its capacity. The pumping stations of about the same vintage have apparently been struggling for years culminating in their partial failure in recent times. It should be noted that these areas are now mainly tourist and second home areas and that this is the closed season with only a small percentage of toiletry usage.

Peter White posted on social media: “This is a tricky one for the water company. All along this part of the coast, the sewers used to discharge direct into the sea (many moons ago). More recently (late 60s?), a whole number of pumping stations were built that intercept these outfalls and pump the waste to a treatment works. There are at least four pumps along the coast between Burnham Deepdale and Brancaster. The sewage works is at the far side of Burnham Market, taking wastewater from quite a large area (map below, which comes from the consultant's report mentioned below. 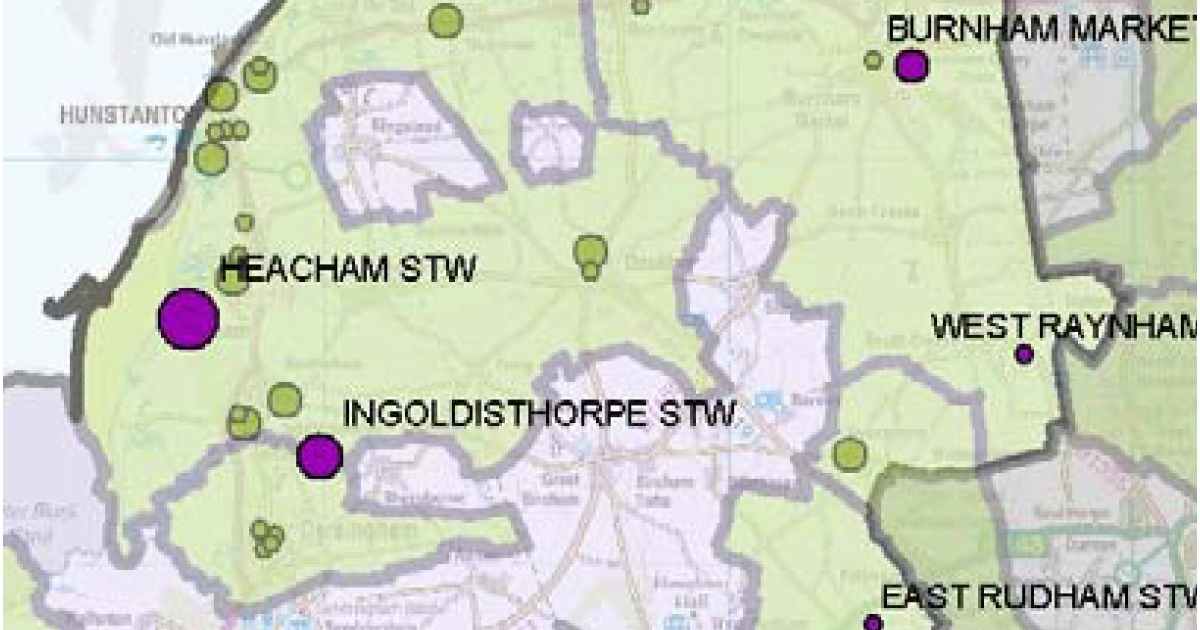 The grey lines mark the 'catchment boundaries' for each works) , and the treated effluent goes via the River Burn to the sea. But that river is too full (because of all the recent rain) to allow them to put all the effluent into it. The storm 'holding tanks' at the works are full, which results in the pipe network all along the coast being full. The cause of it being full is too much rain. Sadly, the situation is pretty similar all over much of the east of England at present (look for all the chat on Twitter about raw sewage being discharged into chalk streams and major rivers). Until there is massive re-investment in the water industry as a whole, and the wastewater treatment industry in particular, there is not very much they can do, sadly. Once everything is full, there's nowhere for it to go.

For some gloomy reading, this 2009 consultant's report shows that the Burnham Market sewage treatment works was at that time already exceeding its design capacity and routinely discharging more waste than it is consented to do (the so-called Dry Weather Flow). https://www.west-norfolk.gov.uk/.../6_water_quality_and...

And on 31st January Jason Borthwick reported: “Sadly situation with pumping station in Burnham Deepdale is worse than ever today. Spewing sewage infected water into storm drains that empty into the harbour.

“Anglian Water describe the situation as being monitored, and no word from Environment Agency who I reported the pollution to.”

On February 2nd James Wild MP wrote: "Groundwater levels are extremely high and the drainage system is unable to cope with the volume of floodwater or to take excess flows from rivers, streams, or highways.

"I am very concerned at the situation many households are facing and sites including Deepdale’s pumping station. I have been raising the need for action on their behalf with Anglian Water, the Environment Agency, as well as other local authorities. On Friday, I met constituents in the and Burnham Market to see first-hand the issues. Today I spoke to Anglian Water again to reiterate constituents’ concerns about the number of tankers being provided. Unfortunately, there are only a limited number of tankers available and they are being deployed across the region to deal with flood issues. However, I was assured that Anglian Water has been using four tankers to help remove floodwater and that this operation continues."

As a former NCC member and working on the Eastern (Anglia) Regional Flood Committee (until 2017) I would remind all that this coming summer looks like being a bumper year for the staycation, possibly the busiest for decades. If the foul water system fails it could create a devastating health problem, putting people at risk, and reducing our capacity to cope with visitors, a multi-million pound industry. Get A Grip.