Their amazing efforts are due to be celebrated in person at an Awards Ceremony in December this year.

Two Norfolk Police officers who courageously entered a burning house to try and save the lives of two women inside have been nominated for The National Police Bravery Awards.

Sgt Kevin White and PC Alexandra Barnes were driving through Bacton in north Norfolk in September 2020 when they noticed smoke ahead. As they drove nearer, they were flagged down by a member of the public who told them there was a house fire, with two people believed to be trapped inside. 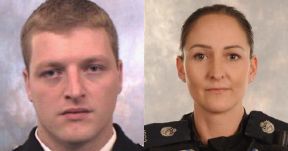 When they reached the house, all the windows were blackened with smoke and the officers were not able to see inside. They went to the rear of the property where there was a wooden lean-to, but the door was locked and they could see smoke and flames in the room beyond, preventing access.

Sgt White went round to the front door and tried to kick it open. It opened slightly and he could see smoke and flames in the hallway, but it didn’t open wide enough for him to get in.

PC Barnes smashed the glass of the living room window and the officers managed to open it slightly. The room was filled with thick black smoke. Sgt White held his breath and looked inside and could make out the feet of a person in the room. He leaned into the living room and, with the assistance of a neighbour, pulled the woman out and placed her on the ground. She was conscious and breathing but had suffered smoke inhalation.

PC Barnes then called to say there was another person inside the room. Sgt White took off his body armour and outer clothing and climbed through the open window. He kept low to the floor to search for the person, holding his breath for as long as he could, but eventually had to take a breath. Meanwhile the living room filled with thicker smoke. Sgt White eventually found a woman slumped in a chair. He picked her up and carried her to the window, where PC Barnes and a neighbour helped to pull her out. She was unconscious and clearly suffering from the effects of smoke.

Sgt White was concerned they were all too close to the burning house, so they evacuated the area and the neighbour said the women could be taken to his house to be treated.

One woman started to show positive signs. A trauma nurse who was off duty arrived on the scene and assisted with first aid. The fire brigade arrived and had a trauma kit, including an intubation tube which was placed down the airway of the patient to help them breathe.

Air ambulance arrived and both women were taken to hospital, where one was put into an induced coma and sadly passed away two days later. The other woman, who was 100 years old, survived.

Sgt White was also checked over for any injuries due to smoke inhalation.

Norfolk Police Federation Chair Andy Symonds said: “Police officers never know what they will encounter when they start a shift. Things can escalate very quickly as this incident shows. And yet our colleagues ran towards the danger in the very best traditions of policing.

“It is without doubt that the bravery and quick reactions of both Alexandra and Kevin saved the life of one of these women. We could not be more proud of them for their work.”

Andy added: “Our thoughts remain with the family of the woman who lost her life in this incident.”

The National Police Bravery Awards honour officers from across England and Wales who have performed outstanding acts of bravery while on or off duty.

As nominees, Sgt White and PC Barnes will join colleagues from across the country at the prestigious 2021 National Police Bravery Awards in December.

The National Police Bravery Awards are sponsored by Police Mutual.