Matt Hallard on his upcoming year as Round Table Chairman

As Hunstanton and District Round Table celebrates their 60th year, it is time for member Matt Hallard to don the chains and enter his year as Chairman. Here, Matt chats to Town & Around about his life before Round Table and his hopes for the upcoming year.

With 400 Tables in Great Britain and Ireland and with more than 35,000 members in 60 countries worldwide, Round Table is an international organisation whose ethos is firmly planted in aiding the community whilst having fun. Hunstanton and District Round Table have 15 current members and their three big events include the Christmas swim, the Sunset Festival and Hunstanton’s bonfire night.

On being a Tabler and becoming Chairman during this momentous year, Matt says: “For us all, it’s a real significant moment. 60 years of raising money, and the philosophy that we have as a Table are all about supporting local causes in Hunstanton and Heacham.”

“For me in Table, I just want to do good stuff for good causes. Those guys are like brothers now. We are all good friends and see each other outside of Table.”

“We really like recipe we’ve got with how we do it. When we compare ourselves to others we kind of break the rules in some areas but for all the right reasons. So we deliver a really good Table experience. It’s a challenging, fun environment.”

Pre-Round Table, Matt worked on cruise ships as a production manager, and then for an events company which involved providing the lighting for film premieres, Cannes Film Festival and private yacht hires. He now works for a big American lighting company that provides entertainment lighting, typically the lighting production you would see on The X Factor and for touring acts like Muse.

Matt moved to Norfolk and eventually Hunstanton around 8 years ago after falling in love with the sense of community in the town. Of course, his family run The Princess Theatre and his wife Anna works as entertainment director at Searles Holiday Park, so the arts are very much ingrained within his family.

Andrew Searles introduced Matt to Round Table after he moved to Hunstanton and invited him to a meeting. There, they larked around on PlayStation games and Matt never looked back. As Matt emphasises: “We’re just regular guys—outside of the events and business meetings it’s about having fun.”

Of course, though fun is a fundamental part of their meetings, the good work the Round Table do for the community cannot be underestimated: each year they raising thousands of pounds for local charities and those in need. For example, they have donated a marquee for a scout group, a football kit for a local team, and they recently re-kitted a sensory shed for a disabled child. Matt says: “It’s important for people to realise that when they throw money in the bucket at the swim or turn up to the cliff that there’s no cost for us—there’s 15 guys that give their time free of charge and throw our own money in too.”

Every year a member runs the London Marathon for charity, with Mark Williamson running this year. Though, as Matt would jokingly like to point out, following his entry in 2015 he remains the fastest Tabler in Hunstanton history with a time of 4 hours and 5 minutes!

The Round Table are responsible for organising the annual Christmas Day swim, which in fact was a tradition that started with the Round Table 60 years ago when Tablers went into the sea on Christmas Day for a laugh, eventually becoming a big event in itself. Now, there are between 2000 spectators with around 60 people swimming.

It is Matt’s job to organise the annual Bonfire Night thos year, and he promises that this will be nothing short of spectacular: “This year for the bonfire, because I work in the events industry we’re going to have a laser firework display (lasers and fireworks) all set to a soundtrack. So everything will be firing to music. It’s not been done locally before.” He emphasises a truly stunning view of the display will be best enjoyed on the cliff top. The family-orientated event is an insanely popular fundraiser with around 5000 attendees each year.

Of course, the Sunset Festival in July is one of the larger events that the Round Table organise and is no mean feat to put on, admitting that the costs of putting on such an event are onerous. Luckily, however, the connections of Round Table members has made the event possible, with one being a scaffolder to provide a stage, Matt borrowing the lighting and a Tabler from another group providing the sound. Matt says: “As a Table we seem to have all the people with all these skills that can help deliver an event—it’s quite lucky in that regard.” This is a prime example of the selfless teamwork that makes the Round Table such a pillar to the local community.

They have already received £4,000 through Tesco’s blue token scheme but, with costs to run the event exceeding £20,000, further support from local businesses would certainly help relieve the financial burden on them, with Matt stating: “We’re trying to encourage as many businesses as possible to spend just £100, and for that we give them a banner and they get their banner at the festival and their advert on all marketing and behind the bar so thousands will see it.”

Looking ahead at his year ahead as Chairman, Matt hopes that he can leave a mark. Hoping to organise for the Tablers to take part in the Three Peaks Challenge (climbing the three highest peaks in Great Britain within 24 hours). He states: “I’ve spent years working in business, running teams of people so I ask, ‘What can I bring to that group?’”

“As Chairman you get one year and you think about what you’re going to achieve in their year. The guys who have gone before me have wanted people to realise that as a group we are a fun place to be. It is not all about the work we have a lot of fun too.”

“There are so many guys that have done such a great job. For my year as Chairman I want to make sure that we don’t forget our roots and traditions unique to our Table. And do the first ever laser show to music on the cliff in the history of Table.”

“In my year as Chairman all I can do really is attend and make sure that when I hand my chains over to Rob Brown that he’s in good shape to take it on and do what he wants with it. It’s one of those labours of love.”

If you are male and between the ages of 18-45 and are interested in becoming a member of Round Table, you can call their new member enquiries on 0121 456 4567 or email hq@roundtable.org.uk. Their Facebook is ‘Hunstanton and District Round Table 615.’

The Sunset Festival will be held outside the Sailing Club on the seafront and will be held on Friday 19th, Saturday 20th and Sunday 21st July 2019. 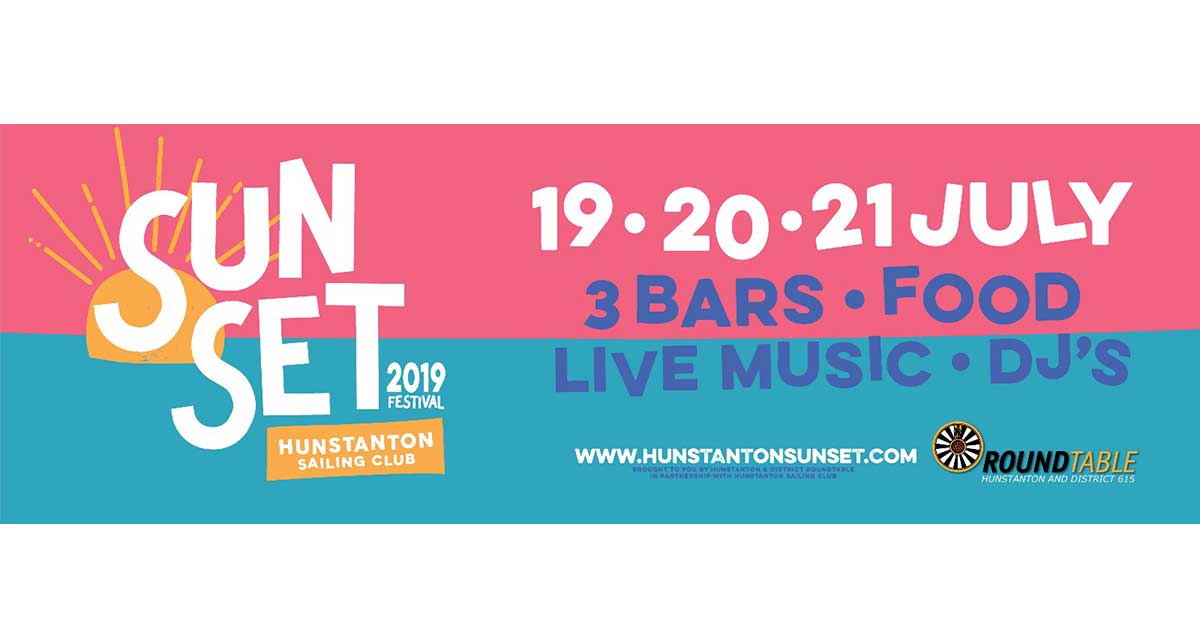 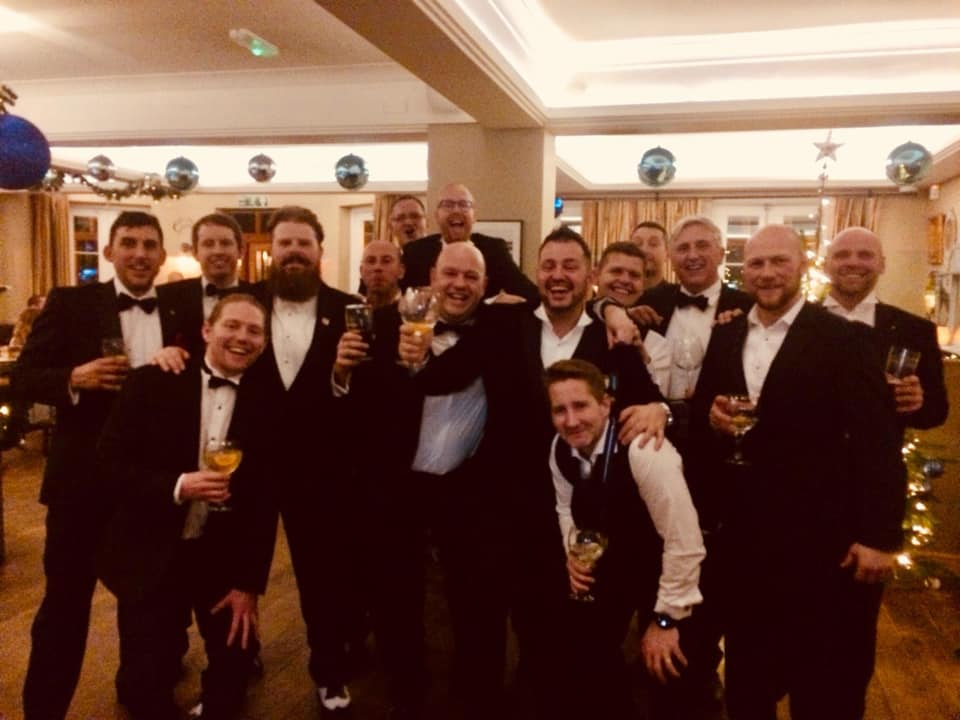 Pictures courtesy of Hunstanton and District Round Table.