Tony Thacker and Keith Whiting, of Heacham Manor Golf Club, have reached the finals of the Daily Mail foursomes.

A national competition, which invites pairs from every golf club in the country, starts out with nearly 1,000 teams. Including individual club qualifying rounds, the tournament attracts an estimated 190,000 entries each year and is recognised as the largest amateur golf tournament in the world. With seven arduous qualifying rounds, reaching finals weekend is no mean feat and every amateur golfer’s dream.

On the terrace at the Pavilion

On Saturday, 27th August, the pair, representing Heacham Manor, hosted Sleaford Golf Club in a semi final for a place in the coveted finals. Given what was at stake, the tension could, quite understandably, be felt in the air. After a close and tight first seven holes, the match suddenly erupted, as the home pairing stole a march on the 8th and 9th holes to take a two hole lead. Managing to keep the momentum, they went onto secure a superb 5&4 win on the 14th hole.

An ecstatic Tony said, “Overwhelmed! Just so delighted to have made the finals, a once in a lifetime opportunity”. Tony immediately paid tribute to his playing partner, “we do bounce off each other, complimenting one another’s game; it’s all about teamwork and we really enjoy playing together”. 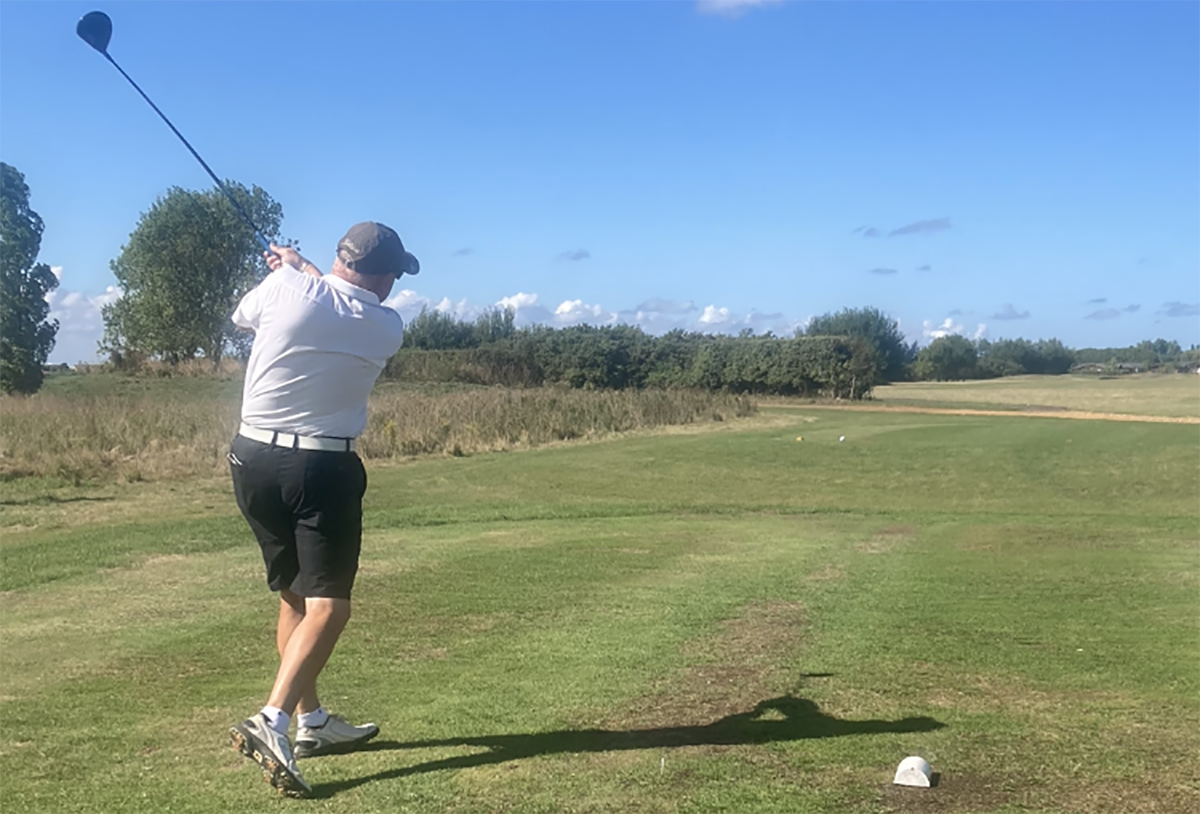 Tony teeing off on the first hole

It certainly puts Heacham Manor on the golfing map. A relatively young course, that was only introduced as recently as 2009, it is not only producing finalists at a senior level but has also progressed young talents Warren Bates and Chloe Tabbard, both nurtured at Heacham Manor and Searles Golf Clubs, and now competing in national tournaments.

The Daily Mail finals are being held at the wonderful St. Pierre Golf Club in Chepstow, 2nd - 4th October. The Welsh course, set in 400 acres of beautiful countryside, will provide a fitting finalé for the pair as they aim to bring the trophy back to Norfolk.

To cap off a memorable month for Heacham Manor Golf Club, they have also made it through to the final of the Cullington Cup for the first time in their history. Open to all golf clubs in Norfolk, they secured their place with an amazing triumph over fancied Royal Cromer Golf Club, snatching victory from the jaws of defeat on the very last hole. The final is being held at Wensum Valley Golf Club on Sunday, 18th September where they will face Middleton Hall Golf Club.