Launch of the Memorial Pavilion Fund in Snettisham

A much loved building in Snettisham that has been central to village life for seventy years is to be restored and upgraded.

After the end of the Second World War the Pavilion was built on the field as a memorial to the fallen of the village. The cost of the materials was raised by public subscription and the labour was given for free by the men (many of them returning veterans) and boys of the area.

The Pavilion was commenced in June 1949 and opened in 1950. The building was recognised and blessed as a war memorial by Dr. Herbert, The Bishop of Norwich. There is a plaque on the exterior wall of the building commemorating this and a ‘roll of honour’ inside listing the names of the people who laboured upon it. This makes the Snettisham Memorial Pavilion rather rare, as it is one of only 63 UK war memorials out of over 90,000 on the Imperial War Museum’s Register, that has a year round, functional, community use in addition to its remembrance one.

At the launch event for the Memorial Pavilion Fund on 11th November the problems with the existing building that Snettisham based architects Atelier Associates had to address in their design were explained.

• The Pavilion does not meet modern standards or regulations in several key areas, severely restricting its current use, including; Health and Safety, Child Protection, Disability friendly building access, Disabled participant facilities, changing facilities for everyone (both of these preventing inclusive access to sport), appropriate toilet and shower facilities and adequate provision for visiting teams and officials.

• The size of the building restricts any wider use as a community space, social interaction pre and post events or it fully supporting mass events on the field.

•Snettisham Primary School can no longer use the Pavilion for changing, nor can they, or Snettisham football and cricket clubs hold multi-team tournaments.

Atelier’s design that includes ‘going upwards’, altering the pitch of the roof and adding a balcony was given planning permission in the summer of 2021 with the support of all statutory consultees and local residents. A target of £500k has been set to complete the works in time for the building’s 75th anniversary in 2025.

Patron of the Memorial Fund The Lady Dannatt MBE Lord Lieutenant of Norfolk, the Chair of Norfolk County Council Cllr Penny Carpenter, James Wild MP and David Bocking, who was one of the people who voluntarily gave his time for the building of the original building, joined villagers at the launch event and the service, conducted by the Rector Rev Rachel Alexander, and wreath laying at the Pavilion which also included some splendid singing by the children from Snettisham School.

Also in attendance were two gentleman in their 90s, Robbie Baker, who was privileged to lay the first brick of the original Pavilion because he was the youngest man amongst the team of volunteers and John Lincoln who was a carpenter by trade and he is the only surviving carpenter form the team. Sadly the other surviving worker, John Hooks, who lives in the village could not attend due to ill health. 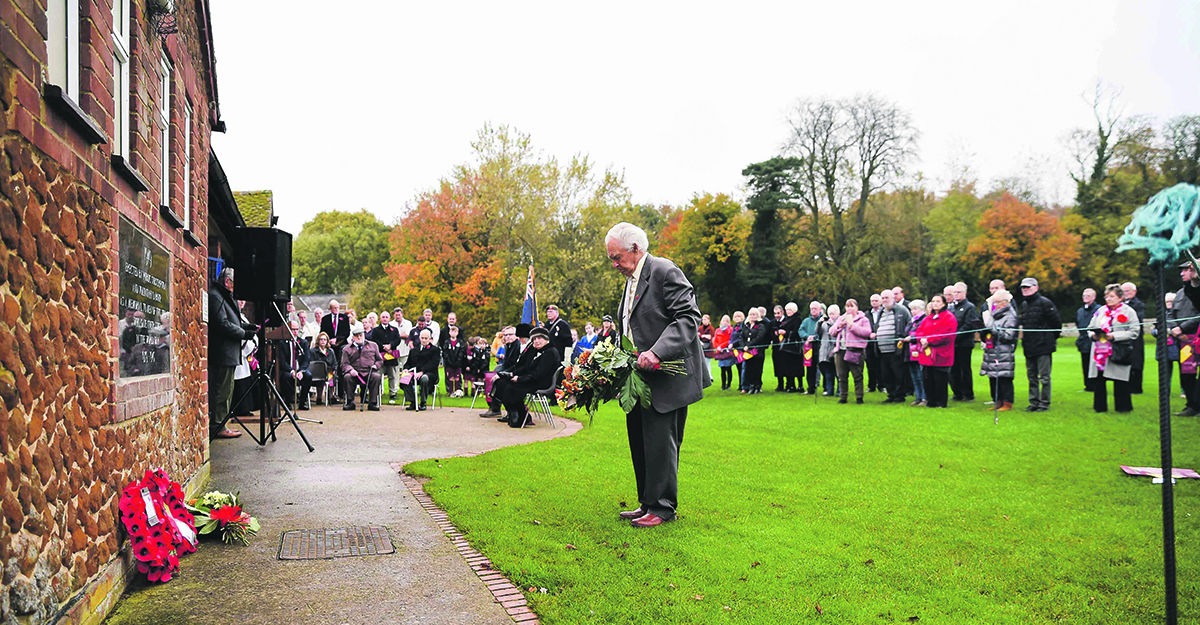 Snettisham Parish Council’s David Bocking lays a tribute to the veterans and young people from the village who gave their time to build the Pavilion.

Stuart Dark said: “ I’d like to thank everyone who helped, took part in and attended (the list is very, very long) our launch event yesterday.

“I have already received correspondence from the Lord Lieutenant (our Patron) that stated this is one of the best community events she has ever attended, her admiration for our clearly close knit village and the warm welcome she was given by all.

“This sentiment was also echoed separately by both the Chair of Norfolk County Council and our MP.

“Lady Dannatt also made special mention of our primary schoolchildren for their amazing singing and our three special guests - men who as boys worked on the pavilion's original build - between them spanning the generations in remembrance of the fallen and giving thanks to those who built it to be enjoyed.

“I'm pleased to say we are now very much up and running towards our objective and we have already raised over £24,000 in donations and pledges towards our £500K target and our website is now live:

“Please become an active supporter by donating what you can on the simple, secure links provided on our website - replicating the 'crowd funding' of those who built this great, well-loved building before us 70+ years ago.”