Businesses in Hunstanton have got into the Platinum Jubilee spirit with some magnificent patriotic displays.

Hunstanton Town Council organised a Best Shop Window competition and the judges, led by Cllr Howard Johnston, found it quite a challenge to choose a winner from the many entries that have brightened up the streets.

Presenting the framed certificates the town's newly elected Mayor, Cllr Maureen Howard said: “I was delighted that so many entered the competition, and their efforts, large and small, are there for all of us to see and enjoy.

“It was a tough call, but we were particularly impressed with the display at The Hospice Shop facing The Green. An enormous effort was put into filling the windows with mementos that reflect the happy mood of the many jubilees we have enjoyed."

Hospice Shop Manager Bobbie Dimblebee had collected all the items for the window display over the past few months and Caroline Dye had the task of creating the display. Caroline said: "I really enjoyed doing it and Bobbie had found some interesting items that make the display eye-catching." The Hospice Charity Shop shares First Prize with the Rainbow Park Amusement Centre at the south end of the town, where the judges recognised that many hours must have been spent climbing tall ladders to festoon the funfair with flags and bunting. 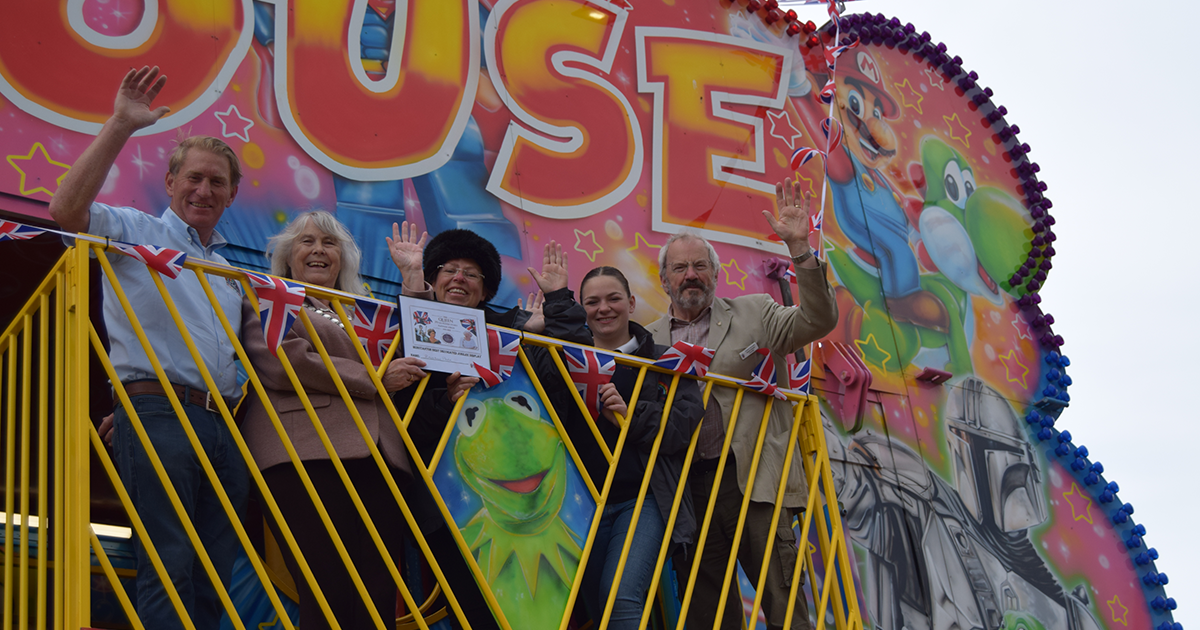 As she presented John-Henry, Colleen and Layla Roper with their certificate the Mayor said: "It's lovely to be here again; when I was fourteen I worked for Rocky Thompson and also spent many happy hours learning to roller skate when Reggie Gale operated the rink."

Asked about the number of flags around the fairground, John-Henry said: "It took two or three days to get it all up and we have about two miles of bunting around the site, and whilst the bunting will come down again we are intending to keep the Union flags up." 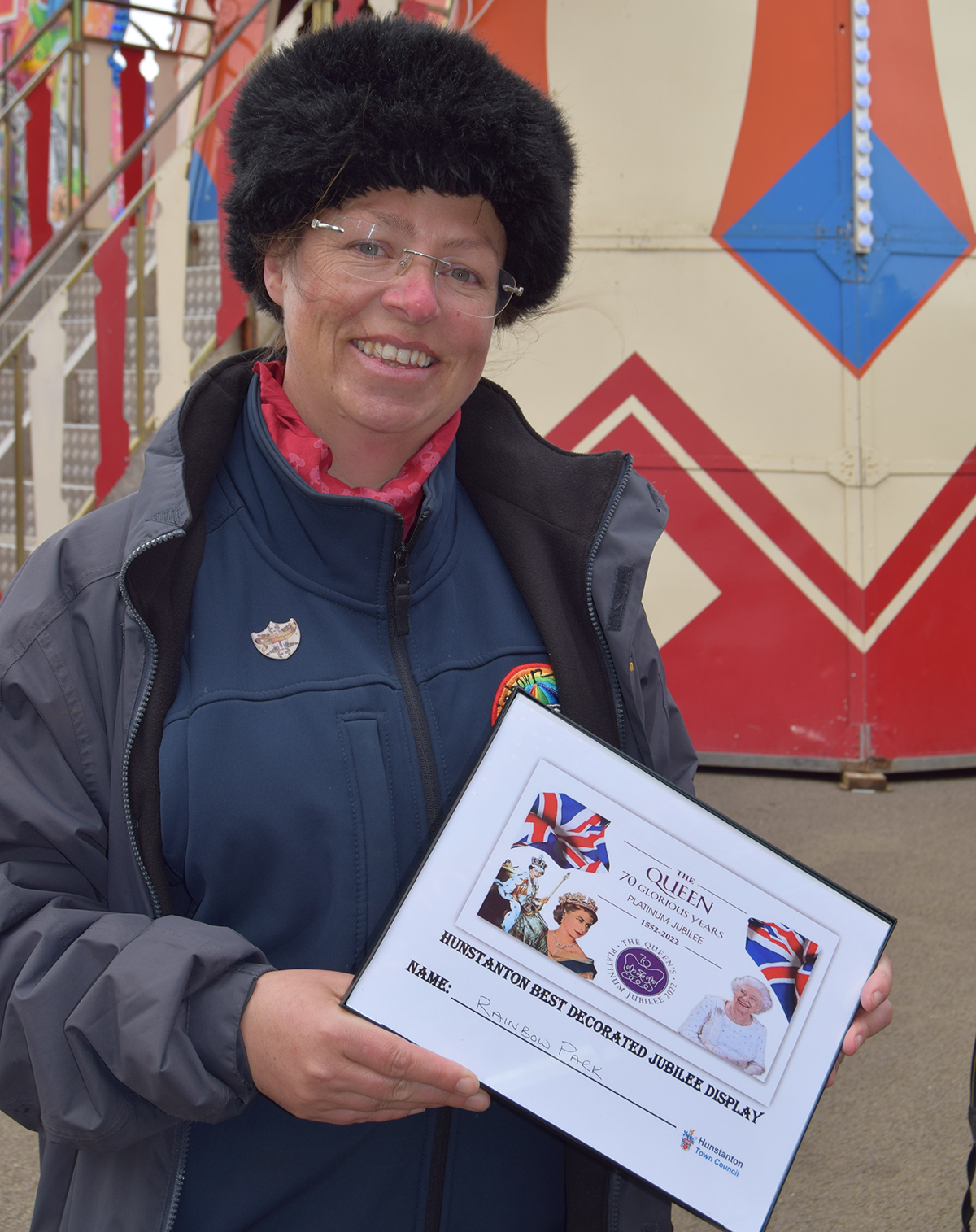 Colleen Roper said: "Receiving this award is really special and we are absolutely delighted to be recognised in this way." 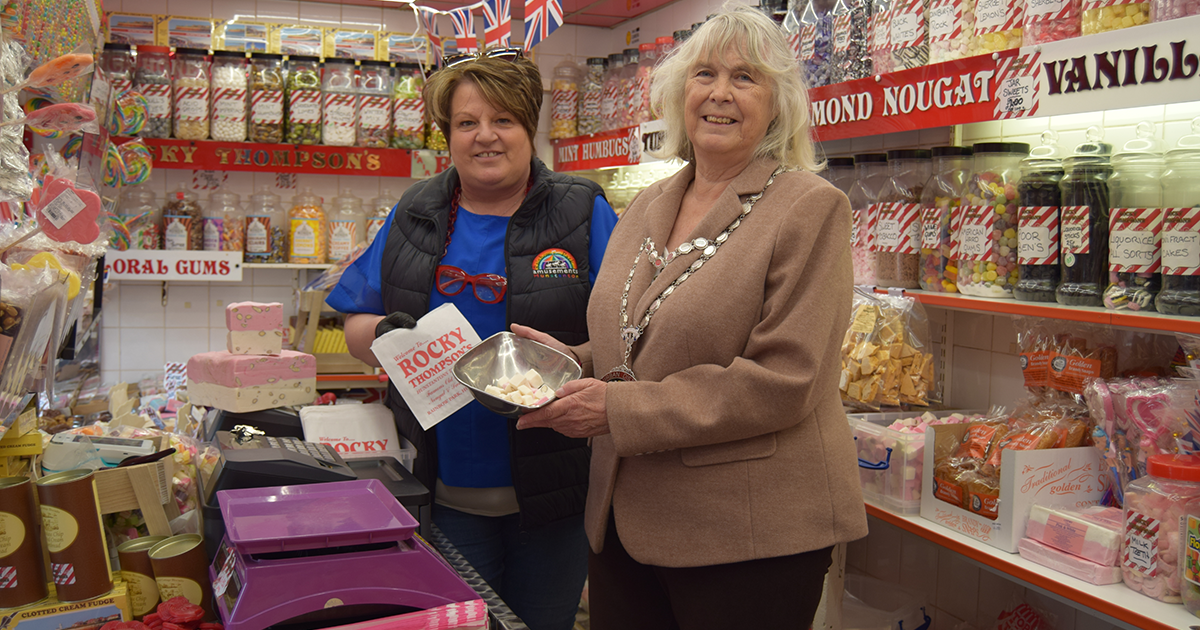 Taking the opportunity to re-visit The Original Rocky Thompsons sweet shop, Mayor Howard was soon behind the counter with owner of the business Victoria Harrison. "This brings back very happy memories", she said.

A number of highly commended certificates were also presented to the following businesses:

Mayor Howard added: “In truth, everyone who entered is a winner. The Queen’s Platinum Jubilee is a time for us all to celebrate, and filling the town with flags, bunting and now these special window displays is a clear demonstration of the strong community spirit that exists in Hunstanton.”