Hunstanton residents have their say at drop-in session

Representatives from West Norfolk Council, Norfolk County Council, Hemingway Design and The Design Partnership were on hand today (7th November) at the Town Hall to answer burning questions and unveil proposed plans for the regeneration of Hunstanton seafront and the development of residential and commercial builds elsewhere in the town.

It was a chance for residents to talk to officials regarding the proposed plans for the town and to submit their feedback.

A number of concepts and designs were on display, including:

Talking to residents at the event, we discovered that one of the biggest concerns is building on the existing car parks. To combat the issue, the idea of converting the coach car park on Seagate into a ‘pay on foot’ car park and letting coaches park elsewhere was proposed by officials. 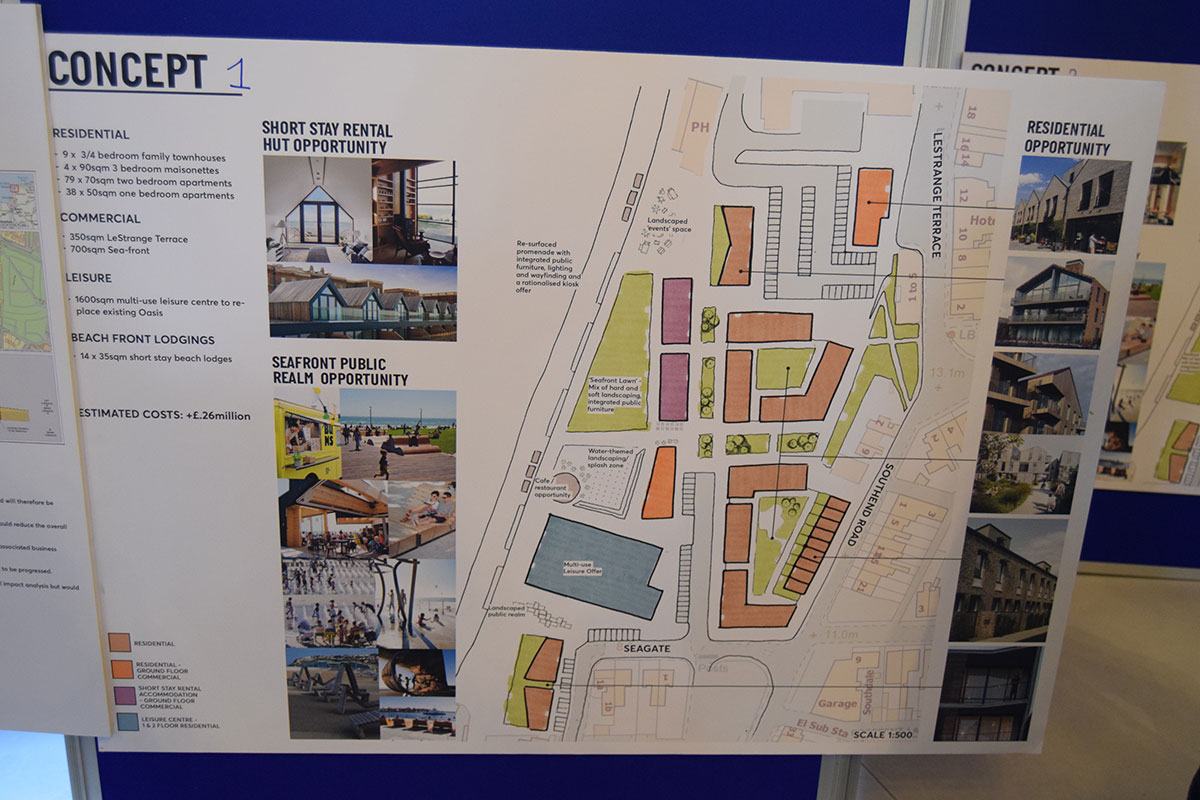 One of the proposed concepts displayed at the drop-in session

“We are really pleased to be part of the regeneration project and to be able to develop the Library service in the town. There is far more space enabling us to do so much more. At a practical level we have surgery space perfect for one to one consultations, a learning area and an accessible toilet as well as more room in the library itself.”

“These are our outline plans that will be tweaked over the coming weeks as we evaluate the response form this and other consultations. We’ve already heard that people are concerned about access issues around disabled parking near the library and the need for a drop off zone and we’ll be discussing this further with the Borough Council.”

Paul told us that he had been talking to people constantly for the first three hours of the event and such was the level of interest and numbers of visitors more questionnaires had to be printed as they had run out by lunchtime.

“Obviously, these regeneration plans are big for Hunstanton, but we’re hoping to ensure and elevate prosperity and vibrancy of the town.

“Hunstanton’s local economy is seasonally dependent and is driven by visitors in the summer holidays. What we’re hoping to do is to extend the season with a provision of more year-round activities.”

On the leisure centre, Matthew told us the two options that they are evaluating:

“The Oasis was built in the 1980s and is nearing the end of its useful life – it is very expensive to run, with heating bills in particular. There are two options: close the current leisure centre for two years while a new one is built or keep it open while another leisure centre is built somewhere else.”

Finally, on the issue of car parking in the town, Matthew notes that the car parks are at full capacity on only 9 days of the year, and it is about “striking a balance”.

The consultation will run until 17th November. You can submit your thoughts online.

Feedback from online and from the drop-in session will be evaluated and planning applications will be submitted over the coming months.

What do you think of the proposed plans? Email me your thoughts at sophie@townandaround.net.