Historic finds at the medieval church of All Saints’ Waterden

Three surprise findings have been uncovered during a £270,000 restoration of a tiny ancient rural church in North Norfolk in the middle of fields near the site of the lost medieval village it served.

The most interesting is a metre-square previously unknown wall painting which has been found at All Saints’ Church Waterden, between Fakenham and Wells, and which is thought to be 17th century. The mural contains faint traces of colour and the parish is seeking advice from conservation experts.

Part of the stonework of a large arch has also been found on the south side of the nave, again inside the church. This appears to match existing traces of an arch towards the west end. Both are thought to be part of a lost south aisle.

In addition, exterior work has uncovered a short stretch of wall reaching out into the churchyard from near the south door. The wall is evidence that there was a south aisle, which is thought to have dated from the 14th century and to have collapsed by the 17th century.

Waterden has a venerable history. The lost village was mentioned in the Domesday Book of 1086 and the village disappeared in the late Middle Ages but it is unclear why. The church is a jumble of architectural styles from Norman to early English and Tudor. A storm in the early 17th century caused part of the nave to collapse but the church kept going and holds eight services a year including a popular candlelit Carol Service on Christmas Eve.

The restoration of the church, which is a grade II* listed building, is thanks to a grant of £210,000 from the Heritage Lottery Fund supplemented with additional funding from the Norfolk Churches Trust, the Garfield Weston Foundation, the Holkham Estate and the Geoffrey Watling Charity.

Father Clive Wylie SCP, Rector of Waterden and vicar of The Creakes Benefice of which Waterden is part, said: "The restoration has transformed the church and secured it for generations to come. It is incredibly exciting that three new finds have been unearthed during the painstaking work. They will add to the already rich and fascinating history of the church. All Saints’ Church Waterden has been celebrated by writers, artists, worshippers and clergy as unique because of its spirituality, remoteness and tranquillity. We welcome everyone to this special place.

"We are enormously grateful to the National Lottery Heritage Fund and lottery players, as well as other donors, for their support in ensuring that All Saints’ can continue to delight and inspire.”

The restoration has made the roof and porch watertight and given it some much-needed guttering as well as improved drainage. Rotten timber has been cut out and new wood inserted to strengthen beams, roof trusses and braces in the nave. Buttresses and parts of walls have also been repaired.

Remedial repairs were made to stonework and brickwork around the whole building, ivy was stripped off and lime mortar replaced.

A key part of the project is to make All Saints’ Church Waterden better known and easier to visit. A five-place car park has been built on land leased to the parish by the Holkham Estate at a peppercorn rent, enabling more visitors to come and see the church. There is a new orientation board in the car park and new road signs. New literature has been written to inform the public.

The restoration has secured the church’s fabric but its simple charm will remain unchanged. It has no electricity or water and that is how it will remain. 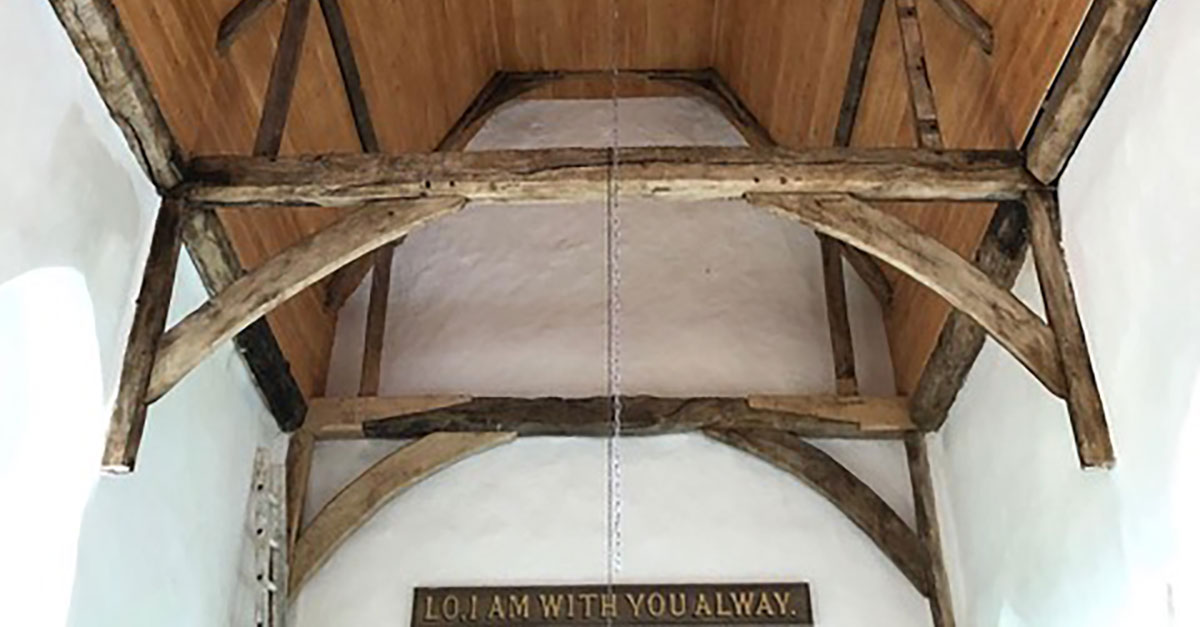