Two musicians with no special cycling gear, but a desire and determination to do something for the Hospice, ride 52 miles to the seaside.

A few years after writing ‘The Wheels Of Chance’, Hunstanton became the home of H G Wells and Rebecca West and Brig-y-don, a semi-detached house in Victoria Avenue was the birthplace of their son Anthony.

The lead character in the book, Mr Hoopdriver, rides (in his case not very well) a forty-three pound bicycle. The old fashioned bicycle that Gizz Butt chose to ride from Peterborough to Hunstanton is not dissimilar from that of Mr Hoopdriver but the legendary rock guitarist’s trip was no holiday, rather a challenging 52 mile charity ride in jeans and leather jacket accompanied by his good friend and fellow musician Simon Wright who was riding a mountain bike pulled from a ditch. “We didn’t want to make it easy,” said Gizz.

Adapting the sit up and beg bike to accommodate a speaker in the front basket meant that the pair had an impressive playlist to keep themselves going on a day with fierce crosswinds, a puncture at 22 miles and a chain that derailed. The playlist clearly helped as Gizz and Simon reached The Terrace in Hunstanton on time and in good spirits. 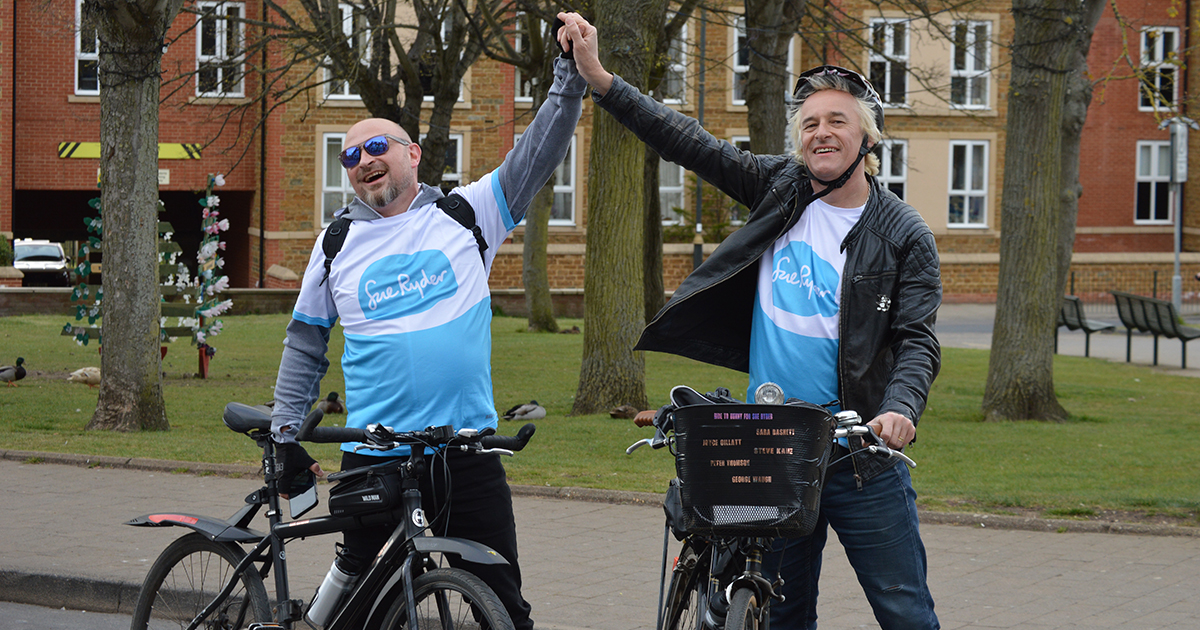 Inspired to raise funds for the hospice in a year when fundraising events have been cancelled, and as soon as riding with a friend was allowed Gizz and Simon planned their ride in memory of their friends and family including Steve Kane, Helen Harber-Day, Sarah Basnett, George Waugh, Peter Thompson, Joyce Gillatt and Terry Whyman and Mike Randall who were cared for by the hospice.

Stickers with the names of friends that have passed were displayed on the bikes. Gizz said: “I feel they were with us all the way; they were such a big part of our lives”.

Gizz’s musical career has spanned four decades playing with The Prodigy, Janus Stark (Every Little Thing Counts), and the English Dogs metal/punk band. This spring Gizz had planned to be touring in Germany promoting the new Janus Stark album, “Everything was lined up then Covid came along; it’s a pity because we are in the top ten there and it would have been good to do the promotional tour.”

“This bike ride was a bonkers idea, but we knew we were doing it for a very worthy cause and that knowledge helped spur us on.” Gizz added. 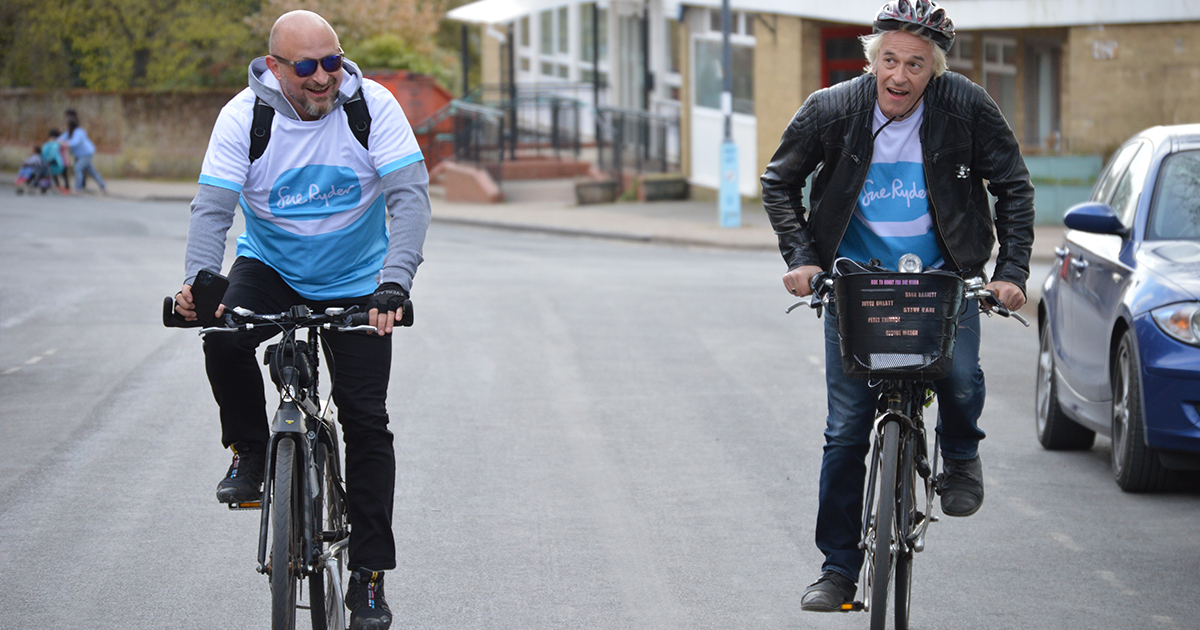 Sister Maddie and friend Spike plus a small socially distance welcoming committee cheered as Gizz and Simon climbed the final hill up Westgate to The Terrace where owners Vicky and Dan Kirk had the bubbly and food waiting, and Gizz was not too tired to open the first bottle. 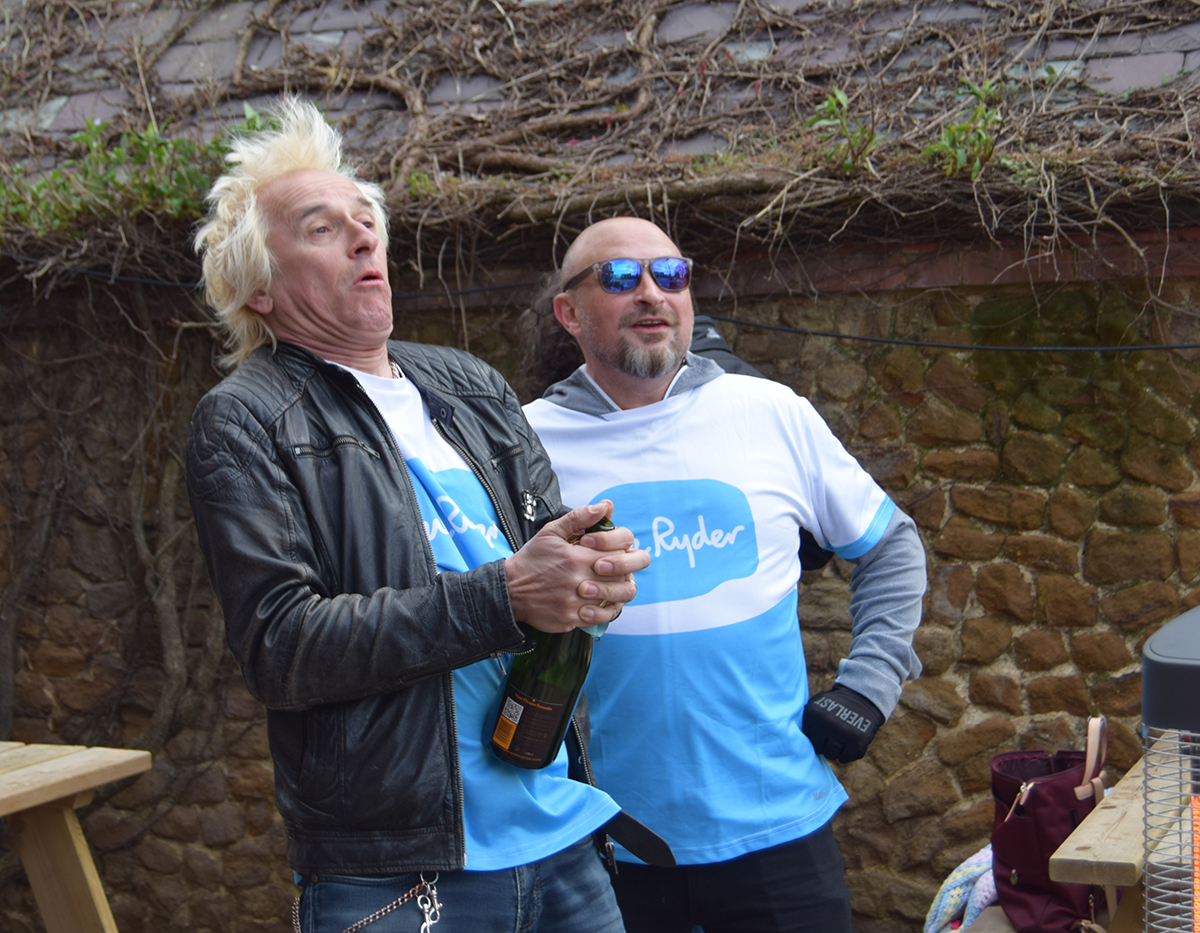 The guys smashed their fundraising target of £1000 and today the total stands at £2477 including funds from a raffle and collection bucket at The Terrace– donations can still be made at Just Giving Gizz Butt3.

Gizz’s next challenge is to write his autobiography; perhaps like HG Wells it will include a bicycle and a little bit of Hunstanton.