Election candidates have their say at Heacham Hustings

Coastal flooding, Brexit and the state of education were just a few of the hot topics discussed on Tuesday night (December 3) as election candidates met voters in Heacham before the General Election next week.

The pews at Heacham Parish Church were filled to the brim with members of public as each of the four candidates put forward their cases in a bid to succeed retiring Sir Henry Bellingham as the MP for North West Norfolk.

The hustings were hosted by Heacham Parish Church and Heacham Methodist Church and was chaired by the Bishop of Norwich, Rt Rev Graham Usher.

Questions on prejudice within parties were discussed as well as issues such as coastal flooding, education, the number of people using foodbanks, recruitment and employment in North West Norfolk, Brexit, the lack of mental health provisions and shortage of good quality and affordable housing in the area.

He went on to discuss how he grew up in Norwich and he is committed to investing more money in the Queen Elizabeth Hospital, transport infrastructure, high quality childcare, more police and protecting the countryside and coastline.

He added: “Vote Conservative and honour the 2016 referendum and get Brexit done, or vote Jeremy Corbyn as your Prime Minister with endless delay, another referendum.”

Liberal Democrat candidate Rob Colwell introduced himself as a local family solicitor and that he has lived in the area for 32 years: he wishes to stop Brexit, create an “open and tolerant society”, fund public services properly, inject £10 billion into schools and save the NHS.

Labour’s Jo Rust discussed how King’s Lynn and the surrounding area is her home, that she loves living here and that she is a dedicated borough councillor: she is committed to a fully funded Environment Agency and a fairer Universal Credit system.

She added: “I campaign for services you and I use every day; I do not just pop up for an election.”

“We will stand up for the many and not for the few” and “restore opportunities that have been lost under nine years of Conservative austerity”, she said.

Michael de Whalley is the Green Party candidate and is also a borough councillor. He introduced himself as a self-employed IT consultant who served in the RAF during the Iraq War. He said he is working towards the borough council declaring a climate emergency and the Green Party is striving for a “better and fairer society.” 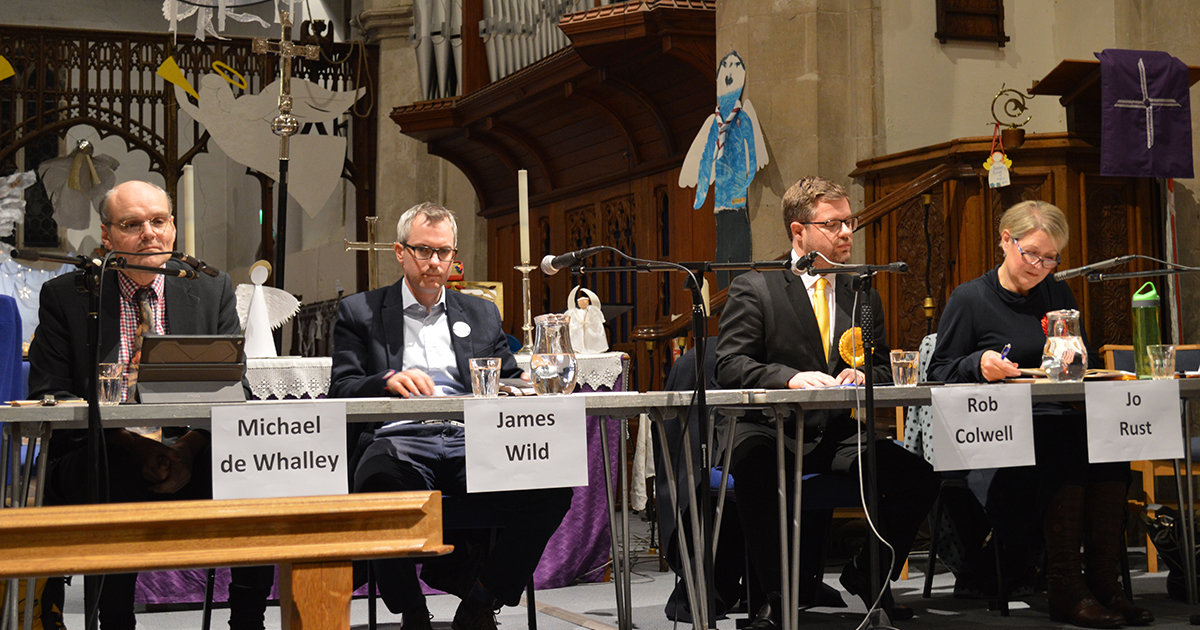 A question on how each party will tackle and fund coastal flooding was put forward to the candidates by Richard Bird.

Mr de Whalley responded that the Green Party are working on avoiding climate change by improving insulation to reduce energy, adapting and improving coastal defences and investing £100 billion a year into mitigating and adapting against climate change.

Similarly, Mr Colwell noted how Norfolk “very affected” and “vulnerable” to climate change and subsequent coastal flooding and warns that current flooding models are insufficient: he says the Lib Dems will invest £10 billion a year on combating the climate emergency.

Mr Wild thanks the Green Party for their campaigning of environmental issues throughout the years and acknowledges the issue of flooding in the area.

He added: “It’s where people live and it’s a very important part of why people come to this area, so we’re going to put an extra £4 billion into flood defences.”

Mrs Rust announced that Labour will do “whatever it takes” to combat climate change and notes that funding for the Environment Agency was cut by 50% under nine years of Conservative austerity. She says £5.6 billion will be put into flood defences and more will be done inland to safeguard coastlines.

She added: “The cost of not acting on climate concern is far greater than it is acting.”

Mrs Rust also made note that she asked Cllr Ian Devereux, the portfolio holder on environment, at the recent full borough council meeting what his residents in Snettisham would think of his failure to declare a climate emergency, with his response being that the people of Snettisham made their choice by moving there.

Retired secondary school teacher Ann Wells put forward a question on how each party will combat fallen standards in education.

Mr Wild referenced his brother, sister and mother who are all teachers and stated that he understands the pressures that teachers have faced due to cuts over the past decade. He reiterated Boris Johnson’s pledge to increase school funding by £14 billion over the next few years and to recruit more teachers.

Mr Colwell blasted the cuts that have left the education sector in its predicament, he also stated that the Lib Dems pledged to inject £10 billion for schools and will work to recruit an extra 20,000 teachers.

He added: “Our schools are underfunded, and it is not fair that these children are being denied the best start in life because of Tory austerity.”

Mrs Rust referenced the statistic that 39 of the 47 schools in the area have lost funding and that there is going to be a shortfall of £4.4 million in Norfolk in 2020. She also noted that Boris Johnson, when pressed, could not guarantee every child would be able to go to school five days a week.

She added: “It doesn’t matter what Conservatives are saying in front of you right now, the statistics show something else; our schools are failing, and they are failing children with special or additional needs even more.”

Mr de Whalley discussed the difficulty in recruiting and retaining teachers and that now most schools in the area have turned into academies, which he says, “takes too much money away from teachers and pupils into administrative costs”. He declares that the Green Party will pledge £4 billion a year into education, they will reduce class sizes and they will take away excessive testing and the pressure of league tables.

The candidates were then asked on how each party will deal with the resolution of Brexit.

Mr Wild noted the exasperation many felt in the three and a half years since the Referendum and vowed, if there’s a Conservative government, the deal will be passed by the end of January and under Labour there would be another referendum.

He said: “I have worked on the deal that Boris renegotiated, it’s a reasonable deal and a reasonable compromise: it sorts out the money that we owe to the EU, sorts out the rights of EU citizens living in the UK so that they can stay and that deal is ready to go."

He added: “Jeremy Corbyn, on this massive issue, can’t even tell us if he wants to leave or remain and that is not leadership, frankly it’s a disgrace.”

Mrs Rust responded in her statement that Labour did promise to honour the outcome of the referendum (referencing the 66% of people in this constituency who voted to leave), but they will not leave with no deal and they will not ignore the people who wished to remain.

She said: “If the Conservatives’ own MPs wouldn’t vote for that deal, why would they expect opposition MPs to vote for it?”

She added: “We don’t believe Boris Johnson’s deal is a good deal – their deal isn’t about working people, it isn’t about employment and trade rights and it certainly isn’t about protecting the environment. Labour will go back and in six months will arrange a deal that we will allow a vote on and this will be a legally binding referendum that unites people.”

Mr Colwell referenced that “Brexit is costing us £1 billion a week", that our “economy is flatlining” and the public have been “misled and lied to”. He wants to use the increased tax revenues and ensure the NHS and schools are properly funded and to “come together”.

Mr de Whalley replied that it makes sense to ask the question again and that “Green support the people’s vote”.

Rt Rev Graham Usher posed his ‘Bishop’s Bonus’ question toward the end of the night, asking the candidates how they will work to renew the public’s trust in politics.

Mr de Whalley responded: “Integrity is everything and without integrity we are nowhere; you can only lead by example”.

Mrs Rust replied: “I want people to have their trust and faith restored. One of ways I will do that is by being locally accountable: everyone knows where I live, my contact details are on all of my leaflets. If I’ve not told the truth you will be able to hold me to account.”

Mr Wild stated: “I’ve spent every day during this campaign knocking on doors and have found that trust is gone in politics. There’s a very simple reason for that and people expect politicians to do what they say they’re going to do and I’m afraid with Brexit, people haven’t done what they said they’re going to do.

He added: “This is the last one chance with this election to restore trust. I’m making promises to people that I’m committed to delivering on and if more people did that, politics would be in a better place.”

Mr Colwell said: “It was James’ (Mr Wild) mate Boris that lied to the Queen, he lied to Parliament and he lied to all of us. We want to restore trust, and as a solicitor trust is very important to me and I want to be your MP and a strong voice for North West Norfolk.”

The public will go to the polls on Thursday December 12 to vote in the General Election.