Tickets have gone on sale for King’s Lynn Town Guides’ annual lecture in memory of their founder, Diana Bullock.

This year’s subject is ‘The clown the town forgot’, presented by Tim FitzHigham FRSA FRGS Trustee of Shakespeare’s Guildhall Trust, and reveals new insights of the comedian Robert Armin.

Town Guides’ Chairman, Doreen Leventhall told us, “Robert Armin was born in King's Lynn, but has been largely overlooked by the town’s historians until recently. Fortunately, through pioneering new research undertaken by Shakespeare’s Guildhall Trust we now know so much more about him, including his former home in the town on today’s High Street!”

Doreen went on to reveal that, “Tim FitzHigham is perhaps best known as a performer and comedian, due to successful appearances in film, TV and radio, and for his Perrier-award winning performances in the Edinburgh Fringe, but he is also one of the few people to be both a Fellow of the Royal Geographical Society and Fellow of the Royal Society of the Arts. Tim has become a familiar face in Lynn, and we are looking forward to a very entertaining and informative evening.”

As well as being a Trustee, Tim FitzHigham chairs the SGT research group. Like Armin, Tim was born in King’s Lynn. He told us, “It’s been a privilege to work alongside local academics Dr Kate Parker, Professor Elizabeth Pye and Dr Paul Richards and we’ve all been supported in our research by Jim Wallis who has spent many hours sifting through the borough archives. ‘The clown the town forgot’ will reveal this latest research about Robert Armin, Shakespeare and the Guildhall and explain how understanding one is crucial to understanding them all.”

Tim continued, “Robert Armin is one of the most important and influential comedians in history. He is credited with being the major influence on Shakespeare. Armin was the first person to play the parts of the Porter in Macbeth, the Fool in Lear and Autolycus in Winter's Tale. He also wrote his own plays and is the only other person in Shakespeare's company to do so.” 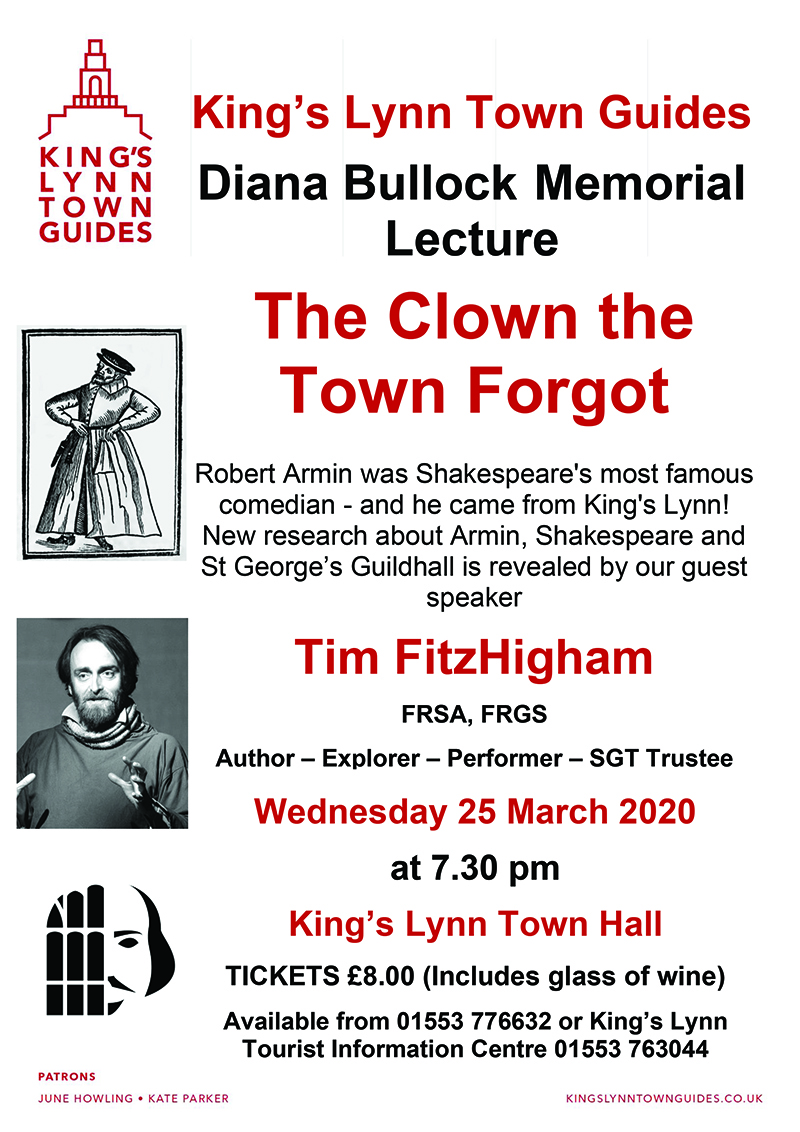 The lecture takes place in the Georgian Assembly Room and drinks will be served afterwards in the historic Stone Hall when there will be a chance to meet and chat to Tim and representatives of the Town Guides and Shakespeare’s Guildhall Trust.

‘The clown the town forgot’ will be held at King’s Lynn Town Hall on Wednesday 25th March at 7.30pm. Tickets cost £8.00 each and include a glass of wine.

All proceeds from the lecture will go towards the Town Guides’ fundraising in support of heritage and conservation organisations in King’s Lynn. Tickets can be purchased in advance and are available now from King’s Lynn Tourist Information Centre in Stories of Lynn or by ringing 01553 774297 or 776632.