For the last few years, Springwood High School have staged most of their music concerts at the wonderful St Nicholas Chapel in Lynn town centre. The annual Carol Concert in December is always a most joyous occasion, but there is always one night that surpasses all others – the Springwood Partner Primary Schools Combined Summer Concert.

On Wednesday July 10th, after two busy days of rehearsal at the chapel (and many weeks preparation in their schools), 150 children from Ashwicken, Flitcham, Holly Meadows, Gaywood, Fairstead, Gayton and St Marthas sung and played their hearts out in front of a capacity audience of extremely proud teachers, parents, grandparents, carers and friends, who showed their appreciation throughout with great enthusiasm!

The evening started with a short performance from the recorder players of Gaywood who had only been playing for a few weeks as part of a new initiative sponsored by the West Norfolk Academy Trust to encourage more children throughout the area to start learning a musical instrument. Not that anyone would have known the players were all novices as they played a short medley of songs with real confidence and musicality.

This was followed by the String Orchestra conducted by Elaine Sargent. The orchestra played five pieces ranging from Beethoven’s ‘Ode to Joy’ to a dinosaur themed finale with ‘Strong Iguanodon’ and ‘Fly High, Pterodactyl’, not only playing their instruments enthusiastically but also finding time do sing as well.

Next came the Wind Band, under the direction of Richard Hall, who played a nicely varied selection of pieces including a funky ‘Clarinet Jive’ and a real crowd pleaser – the Abba song ‘Mama Mia’. There was a fabulous range of instruments on display – flutes, oboes, clarinets, trumpets, trombones and a great percussion section.

Both the String Orchestra and Wind Band rehearse throughout the year after school every Monday at Springwood, but it was fantastic to see all the young players from our cluster schools (plus a few from other schools as well) coming together to play at the concert.

Every year, one of Springwood’s Senior ensembles performs and they are always greeted with great enthusiasm. This year, it was the turn of the Concert Band, who romped through a boisterous set finishing with an arrangement of the Pharell Williams song, ’Happy’ which ended the first half with everyone in the chapel clapping along. The message here is clear – the primary children are at the start of a musical journey. Keep playing and this is where you can be in a few years!

The second half of this concert is always very short, but very loud – 150 children singing with great gusto! They were also ably assisted by Springwood’s Cantabene choir. All four songs were beautifully introduced by children from the different primaries, and they were directed by students from Springwood. The mood was set by a jazzy Gospel Medley before they launched into ‘When I Grow up’ and ‘Naughty’ from the musical ‘Matilda’. Some parents were looking slightly alarmed at how vociferously the phrase ‘Sometimes you have to be a little bit naughty’ was communicated…. A slightly more laid back feel was established for a beautiful performance of ‘What a Wonderful World’ before the final song once again got the chapel rocking with George Ezra’s ‘Shotgun’

This was a wonderful concert. It is a rare opportunity for children from the primaries to join together to make music. It is an inspiring and joyful occasion, and, it is hoped, will encourage all of the performers to keep singing and playing for a very long time to come. 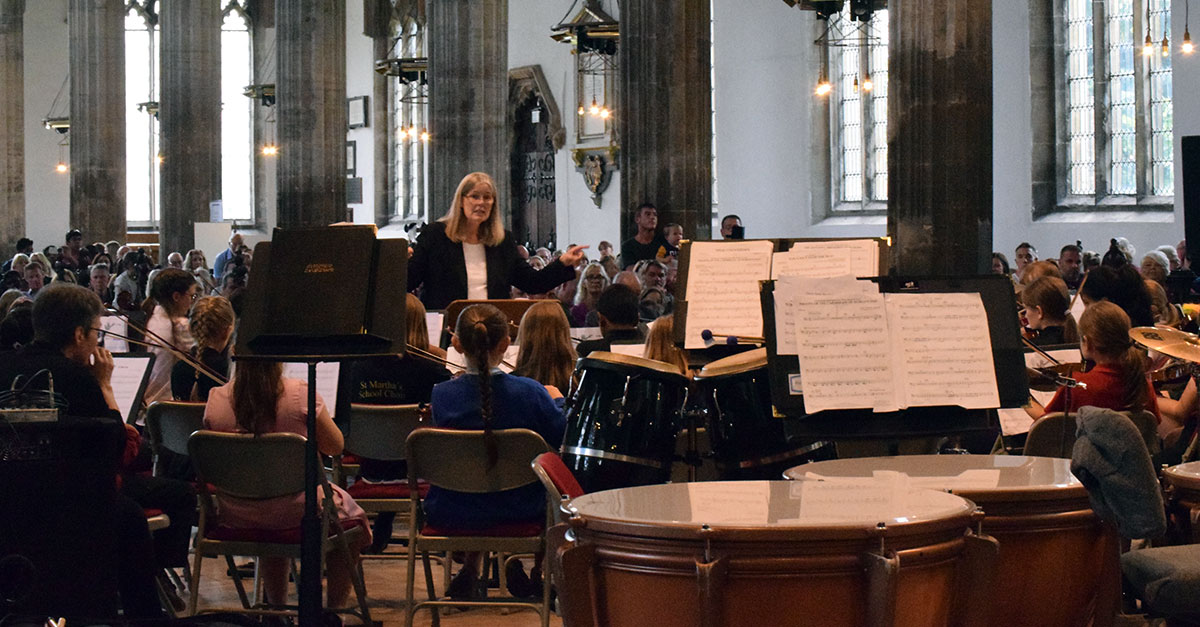