Chin Up we have been here before

This April I was 74 ,yes I know it’s hard to believe but there you have it. By definition I was the first year of baby boomers, (22/04/46). My father came home from WW2 and wasted no time, he was getting on a bit by those days standards at age 40 to be having his second child, my elder brother Bill (Jnr) having been born in 1941.

I could go into the standards of living in Greater London NW9 in those early years, rationing, playing on bomb sites, overcrowding of housing, shortages of so many basic commodities, eventually overcrowded schools with 50+ per class and so much more; perhaps a different story to be told.

What I would like to talk to you all about is/was the resilience of ordinary folk, people trying to get through, especially with health and welfare issues. I consider myself very lucky, having both my loving parents alive and healthy, they didn’t have a bad war really, although we lost some close relatives; my mother’s only brother killed while on blockading duties off southern Italy (probably Bari) in a submarine and another relative killed in the army. Bombs, or flying bombs, wrecked a house my mother was living in and nearly killed the pet dog ‘Peggy’, a Red Setter that survived because the bath upturned and trapped her inside. My family’s burial plot is in St Lawrence's Church Whitchurch, Edgware, Middlesex, is surrounded with the memorials to those who perished in this conflict, mostly civilians killed in the raids. Upwards of 50 million people died in the Second World War so we, as a family, got off lightly.

In 1948 the National Health Service was created, thank God, and Britain led the way in post-war Europe in the health and wellbeing of its population, I believe, still leading the way with care for all from the cradle to the grave. 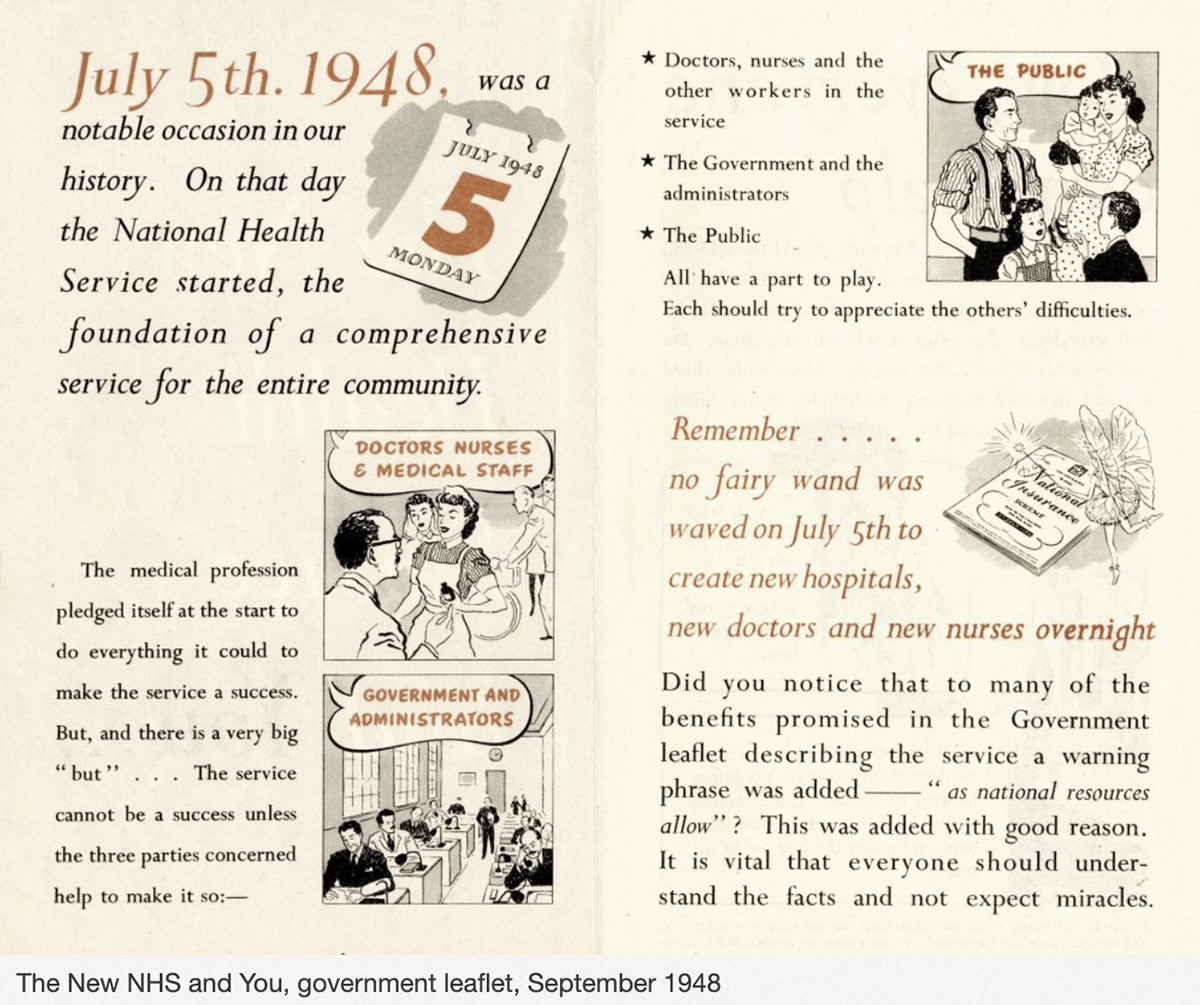 By 1951 my family, through me, tested the system when a ruptured appendix nearly finished me off. I understand that at that time there was an epidemic called Poliomyelitis ravaging through the nation and then, as now, normal medical practices were over-stretched treating what was, in those days, a serious illness, often leading to death. I have to thank the staff and surgeons of a now closed and redeveloped Hospital called Edgware General for saving my life. Polio as it became known took lives and blighted many others and while I don’t know or remember how long it persisted, I do know that this disease was believed to be water carried. All public baths were closed, including swimming pools, for some considerable time before eventually the vaccine was created and life returned to some sort of normality. Bill Gates and Rotary are still working (nearly there) to eradicate this terrible disease worldwide even today. My second encounter with the NHS was as a child of just 6 years old. I contracted Osteomyelitis, This debilitating disease often left people crippled for life, but with the aid of the new super drug, Penicillin, and a very long time in Stanmore Orthopaedic Hospital, I received enough care to live a normal life although the 5/8” discrepancy between left and right legs did slow my running career down in later life. So that’s twice I owe my life to the NHS.

Living in NW9 Colindale, I had the constant reminder of war with Hendon Aerodrome at the end of my road, many hours were spent watching aircraft training and open days were a real education. Hendon Police \Academy was adjacent to the Aerodrome and the skid pan, used for car driving training, was a sight to behold. We as boisterous youngsters would ride our bikes, unofficially, on the huge skid pan returning home to the disgust of mothers, with clothes caked in oil and grease where we had come off the bikes on the pan. Colindale Ave also boasted the National Newspaper Museum but that had little interest in those days. A huge tuberculosis isolation hospital was in close proximity, this may have had an effect on my body as when all school children were tested for TB, I didn’t need to be inoculated.

I married young, just 18 and my first son Richard Jnr who is now in his 56 year was born. He was born with a defective heart but with the aid of The National Heart Hospital he has grown up, held down a responsible job, made huge contributions in taxation, married and has three children of his own. His consultant, a fierce lady called Jane Somerville is still practicing and has convinced Richard to become a director of the Somerville Foundation, helping others with their day to day challenges of living with heart disease. I am so proud of all my children but Richard is incredible. Do I owe the NHS? Of course I do.

My parents were hard working retailers who worked all the hours possible to improve their and our living standards. We had an early black and white Cossor 12” Television, my earliest recollection is of the old King dying, sombre music all day and shutdown, this of course was followed by the Coronation with all its pomp and grandeur. However even then there was the matter of the Korean War with its regular updated broadcast of how many killed and injured, far too many and still in conflict North and South.

Let’s not forget that during the 50/60/70’s the Cold War was in full cry with threats from the East and West coming on a regular basis, the escalation was ridiculous, with, we were told, enough missiles to finish the whole world off. The “V” bombers were constantly on standby, Polaris or their equivalent were patrolling under the world’s oceans and the general population were subjected to, on a regular basis, what to do when the 4 yes 4 minute warning was sounded. Frightening times with constant reminders by our respective governments that ‘the end is nigh’, especially if we don’t re-arm and spend NHS monies on defence. Does anybody remember the B movies about when the bomb had gone off and what people did to survive?

It is often said that our greatest ally is the USA, and without them it is difficult to see how WW2 could have ended in the freedom of the world being achieved, although it took until quite recently for Britain to pay them for their WW2 lend lease and other loans back. Since WW2 they have offered us the opportunity to assist them in their various quests to bring the free market, freedom of the ballot box and the right to self-govern. It started with Korea, went on to the Cuban missile crisis, that fortunately was over before it really got started, although my brother Bill a Royal Naval Reservist was called to arms only to be stood down very quickly, it really was that close. The Americans went on to Vietnam, that thank goodness we declined to get involved with. This was followed by the middle eastern conflicts including the Iran/Iraq wars, the invasion of Kuwait by Iraq and those eventual two wars with Saddam Hussain and Iraq. Thousands of mothers sons were killed in these conflicts. All reported daily influencing the way we all felt, reacted and lived.

The Falklands was in my opinion a contrived war that once again saw mothers sons killed on both sides for the purposes of politics. In a very short time fervour was created and I have to admit that I was of an age to be influenced by the rhetoric of that time. I was a private pilot and the rumour around our flying club soon manifested itself into, as in previous conflicts, that we with our special skill would be called up, all very exciting and complete rubbish. Thank goodness we had true professionals prepared to risk and indeed sacrifice their lives for us sleeping in our warm beds.

Financial crisis has been with us since I was born, I can remember my father speculating on eggs, potatoes, fuel, businesses and freeholds. Some he won some he lost. In life knowing when to hold them and knowing when to fold them, is still key. I like so many of my contemporaries speculated on businesses and freehold properties, following in father’s footsteps , having a substantial portfolio of both until Badger Lamont, came out with his cure all for the British economy of increasing interest rates to that of a Banana Republic. Most of my business associates were based in and around Luton where freehold values collapsed by around 40% leaving much negative equity (remember that expression?) Our business interests wide and various all took a tumble and it was almost impossible to get tenants to pay their rentals, all sound familiar? Badger Lamont said “if it ain’t hurting it ain’t working”. Incidentally Luton itself never completely recovered as an Industrial town employing thousands of workers but redesigned itself as a blue collar university town, well done them.

To close I wanted to try to explain why the current epidemic is difficult, worrying and for some, and a financial nightmare for many. However we will recover, the loss of life is terrible and we have friends and relations that have been lost to this horrible virus, but life goes on, as a nation we will survive, we will recover and regain a version of the normal, hopefully we will learn from this disaster, not blame anybody or anything but accept it for what it is another steppingstone to the future. Questions must be asked about where this country’s wealth should be allocated to, I have misgivings about HS2 and Polaris being really necessary, when clearly the whole nation, quite rightly, respects and relies on the NHS.

Clearly if the world is to have a pandemic every 50 to 100 years or so, it needs to be prepared, not wasting money and resources on politics, left or right, blue or red, east or west. Certainly not developing more weapons of mass destruction, even if does employ some people in the short term. Tony Blair said: “education, education, education”. I would say, history, history, history. Let’s not continue making the same mistakes time and time again.